Among Us: the most popular game among Gen Z 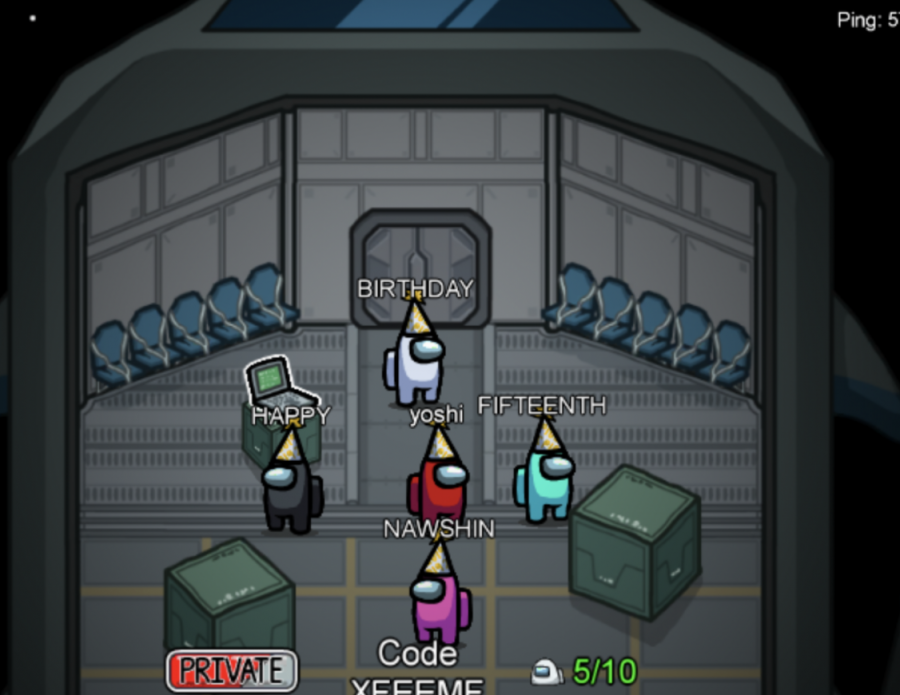 Celebrations among friends continue in a virtual setting as games like Among Us help to connect others together despite the ongoing pandemic.

Gen Z has been renowned as a generation of sweeping trends and obsessions, with the latest one being the recently popular mobile game, Among Us. The mafia-style space astronaut killer cartoon game has taken the world by storm these last few months and has given kids a chance to reconnect in a world where it is impossible to interact freely the same way as before.

The beginning of 2020 was defined by staying at home, baking treats, making whipped coffee, and playing hours of Animal Crossing. Now, these all have been replaced with the stresses of school and a cut-throat fleeting mystery game—a dramatic shift indeed.

Among Us is a multiplayer game that is set on a spaceship where an imposter is lurking among the crewmates. The goal of the crewmates is to identify and oust the imposter while completing certain tasks as the imposters aim to sabotage and deplete the ship. Though this concept isn’t brand new, the game holds a unique and cute art style that makes it appeal heavily to those of this epoch.

Due to its connective nature, as with most multiplayer games, friend groups have been able to revitalize and sustain their relationships in a new format outside of social media. Events like parties and celebrations have been reformatted to fit our virtual world when it is impossible to be face to face.

“Since I wasn’t able to have a party for my fifteenth birthday this year, my friends and I all decided to celebrate together by playing Among Us,” said freshman Nawshin Tabassum. “We all put on party hats on our avatars and changed our names to spell ‘happy fifteenth birthday Nawshin,’ which I thought was so cool. I was beyond disappointed that I wouldn’t be able to see [my friends] in person, but this game just made it all a little better.”

The success of Among Us is even more impressive when considering that the game was developed by a three-person team belonging to InnerSloth, a video game developer company, in 2018. They managed to create a game that not only topped Apple AppStore’s most downloaded free games chart two years after its release but is even rumored to possibly win Game of the Year at the Game Awards 2020.

The game’s popularity has genuinely shifted the way Gen Z communicates during the pandemic. Players can look forward to new updates as the developing team continues to work and improve upon it. The acclaim and demand for the game have yet to diminish, so it’s safe to say that we can expect future advancements and improvements. Among Us will most likely continue to be a beloved game to help many get through troubling times, as all great games have in the past, and solidify itself as one to be remembered for years to come.