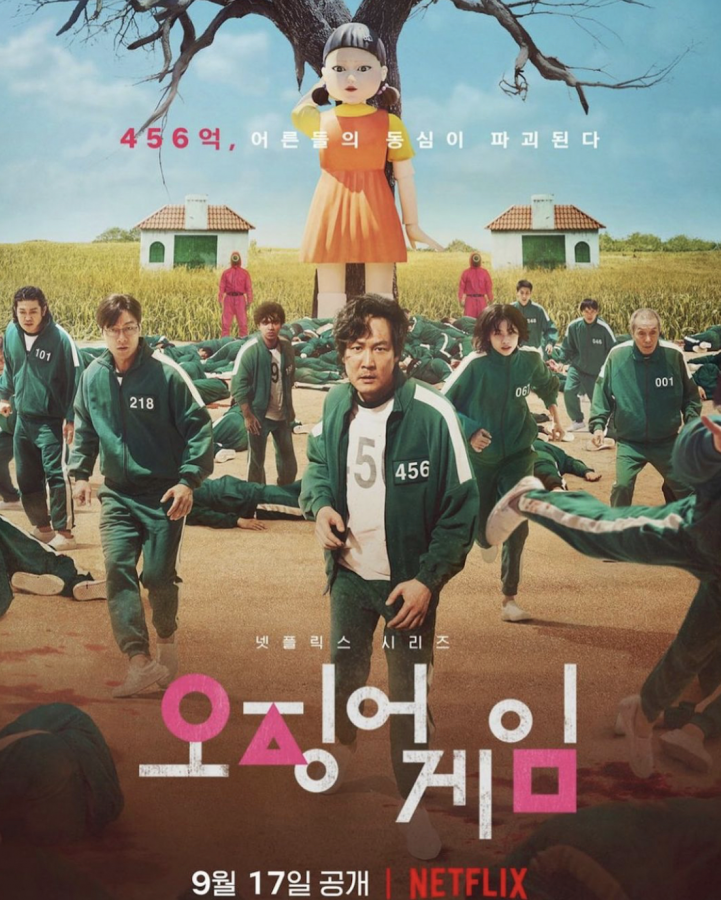 IMDB under the Creative Commons License

The large statue centered at the back is a South Korean children’s textbook character named Younghee. The statue’s eyes have motion detectors in them to see if any of the players are moving whenever she turns her head around during the redlight-greenlight game.

“Squid Game” is the latest unforeseen sensation from Netflix, and while there is debate over whether it is overhyped, there is no denying that western media has yet to witness the impact of a show like this.

The show quickly rose to success as it skyrocketed to number one on the Netflix ranks in over 90 countries, showcasing its global fame. “Squid Game” is a South Korean survival thriller where debt-riddled contestants compete in six games for 45.6 billion won (or 38 million dollars) and the privilege to live. The games take place on a secluded island, where 456 players are ushered around like cattle by masked soldiers. Each game tests the morality and strengths of each character as the audience watches just how far each of them is willing to go for success.  Besides ethics, many volatile aspects of society, such as poverty, classism, corruption, and greed, are also addressed.

“I loved how the show dramatized extreme classism, especially in South Korea—with its shrinking middle class,” said junior Grace Kang, who is Korean-American.

Each game is based on classic children’s games from South Korea. Think of four-square, hopscotch, and duck, duck, goose for American comparisons. One game that a social media trend on TikTok has popularized is the dalgona (honeycomb candy) game, where players must successfully remove a particular shape from a piece of candy using “only” a needle. This said, players could manage to get away with cheating—just as long as the hot-pink-suited soldiers fail to catch them.

“I felt really happy to see all those Korean children’s games being played in the show. I remember being made fun of as a kid for mentioning that my favorite candy was dalgona, just because no one else had ever heard of it,” said Kang.

The show’s writing and phenomenal cast can be accredited for critical acclaim.  There were many seasoned names from the South Korean film industry, but there was also plenty of new talent, such as Hoyeon Jung, who is the actress for the fan-favorite character of Saebyeok.

“The show did an excellent job with the casting, especially [since] I didn’t even realize that it had been Hoyeon Jung’s first time acting. The people they chose did an amazing job in becoming their characters and making you feel strong or conflicting feelings [for] each of them,” said junior Janiya Mercado-White.

The inclusion of unique characters adds to the show’s novelty, such as Ali Abdul, who portrays the role of a Pakistani migrant worker. Saebyeok Kang is also prominent since she is a North Korean defector whose motivation is to help her mother escape to the South. Even the character of Sangwoo Cho adds mystery through how he went from being a graduate of the top university in South Korea to being shrouded in outstanding debt.

Before watching the show, it is essential to note that the central premise centers around heavy gore and graphic death.

“I did struggle [to watch] some of the scenes because I wasn’t expecting the amount of gore. Except, I don’t think an additional warning is needed besides the one that Netflix provides at the top [left] of every episode,” said Mercado-White. “Those who do have a lot of difficulty with watching gore shouldn’t take the warning lightly.”