The crucial steps to become a high-value man. 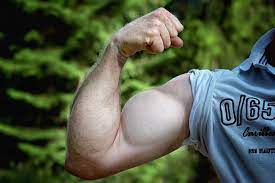 Do you see this amazingly fit and masculine high-value male? This could be YOU if you stop being lazy and follow this effective 5-step regime to the ALPHA WORLD!

All women want a sigma or alpha man, at least according to the all-knowing Kevin Samuels and incel forum moderators who rely on scientifically disproven knowledge about wolves.  One would probably be asking himself at this point just how he can achieve such a level of prestige and effectively stunt the entire Sparta population. Lucky for you, here’s the five-step process for obtaining a sigma grindset.

The first and most important aspect is to start a podcast. DJ Akademiks, Fresh and Fit, and Charlemagne tha God are all phenomenal, well-educated men who share one thing in common: a podcast. They label themselves as life coaches, teaching men to become the best version of themselves, to become a “’high-value man.” Men don’t need to lift weights or consume an aggressive amount of protein anymore. A man just needs to grab a microphone and talk about one in a zillion scenarios to justify any bigoted belief or spew out so much misogynistic rhetoric that one could question whether or not they’re even attracted to women in the first place.

Sure, a podcast doesn’t follow the traditional route of male gender roles, especially concerning a significant rise in women joining the workforce and men being FORCED (insert sad emoji) into becoming homemakers. Still, the unique thing about a sigma (or alpha?) man is that he doesn’t ask for permission or approval—he takes and LEADS! He asserts his role as a manly man and doesn’t care about others’ opinions. Of course, the average beta reader probably wouldn’t have seen that perspective, but it’s okay. This is just the first step.

If a man has to get a traditional job, he MUST make sure he puts his entire mind, body, and spirit into that job. Make sure that position will force him to sell his soul to capitalism and burn away everything meaningful in life. That job is what will ultimately set him straight and keep him on track to the ALPHA WORLD! Maybe just by listening to the Jordan Belfords of the world, one can at least catch a glimpse of what it’s like to be a high-value man since the corporate bros are so weak and girly not to make a podcast. What’s next? Are you going to start wearing pink?

Let’s say a developing alpha started the podcast and is in a relationship right now. What’s next for him? Cheat. Cheat, cheat, cheat, cheat! It’s only in a man’s divinely domineering nature to want to cheat on his girlfriend with as many women as possible, so be a man and unapologetically express that part of yourself! Hell, even if you have a whole litter of kids like NBA Youngboy managed to achieve. 11 alleged kids at 22. 11 alleged kids at 22. Repeat that to yourself, making it your daily mantra and affirmation. That should be the level of cheating every man should aspire to have.

That being said, if a girl cheats, there is something psychologically wrong with her. SEND HER TO THE PSYCHIATRIC FACILITY! No questions and no back talk!

Always manipulate to the top. If one is not bowing down to a lifesize mannequin of Patrick Bateman every night or memorizing every step, sentence, and word of the 48 Laws of Power, then what is he amounting to? A high-value man should aspire to manipulate so much that he comes home after a long day of spewing misogyny on a microphone or slaving himself away to a corporate job, looks at himself in the mirror, and has effectively created so many false realities of himself so he can always justify their actions. “Who is that man in the mirror? What have I done? Have I gone too far?” Exactly, king.

A high-value man eventually gets called out to a point where he cannot manipulate the situation or create another strawman argument on why women are objects. People call this ‘accountability’ or ‘karma,’ but this ACTUALLY is just a plain misunderstanding. All these traits, essential to being a high-value man, are also just vital to men’s nature altogether.