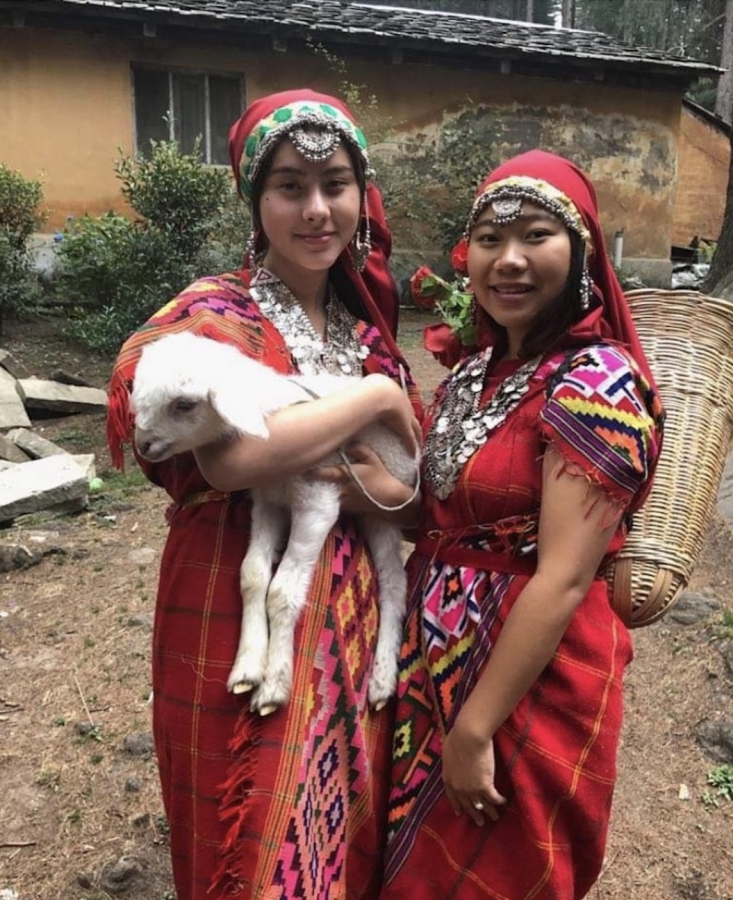 Sophomore Tenzin Werner and her sister celebrate the Buddhist holiday, Bodhi Day, together while wearing the traditional clothing of the Kinnaur tribe in Himachal Pradesh, India.

As the nation begins to be swept away by the holiday season and festivities, entranced by the joys of Christmas and the “most wonderful time of year,” certain holidays don’t enjoy the luxury of the spotlight. Despite Northern Virginia’s reputation as a diverse and inclusive community, quite a few people remain unaware of the various holidays celebrated throughout the winter season.

The first of the many holidays is the Hindu celebration of Diwali, otherwise known as the Festival of Lights. Diwali happens every year in mid to late November, and though it is a holiday of Hindu origins, it is widely celebrated by many faiths and cultures throughout South Asia.

“Diwali is special to me because it normally marks the beginning of the holiday season,” said sophomore Rhea Sidhu. “To everyone else, it’s just another day, [but] for us, we get to turn on all the lights, spend time with family, and light fireworks in celebration.”

Diwali is celebrated over five days, with the most significant day being on the night of a new moon. The lights and celebrations of the holiday during the dark night represent the victory of good over evil and hold cultural significance, making it the most prominent festival in India.

Hanukkah is an example of a holiday that is well known in the sense of its existence being acknowledged by most Americans, but there tends to be little understanding of what the holiday actually signifies.

“There is this idea that Hanukkah is just the ‘Jewish version’ of Christmas because it happens to fall close to Christmas in December,” said senior Carolin Vorona. “Hanukkah is its own holiday within a different religion, it is not related to Christianity.”

Hanukkah celebrates the rededication of the Temple of Jerusalem after it was taken back from a tyrannical king by a group of Jewish warriors. The celebration spans over eight days, and during each day, one candle of the Hanukkah menorah is lit to represent the miraculous eight days of light that allowed for their victory in reclaiming the temple.

Another less revered holiday is Bodhi day, which is celebrated by Buddhists mostly of the Mahayana branch. It commemorates the day where the original Buddha, Siddhartha Guatama, first reached a state of enlightenment, also known as Nirvana.

“The term Bodhi refers to the name of the type of tree the Buddha was meditating under when he discovered the root of suffering,” said sophomore Tenzin Werner. “The day is usually spent religiously, dedicating ourselves to meditation along with a traditional meal.”

The holiday falls on the eighth day of the twelfth month of the Chinese lunar calendar for Mahayana Buddhists but is typically celebrated on the eighth of December for most other sects of the religion. It is a quiet and peaceful day spent appreciating a lifetime’s worth of blessings and lessons and surrounded by loved ones.

Lunar New Year, or Chinese New Year, is a holiday celebrated by many but still remains widely unknown to the general population. It marks the beginning of the lunar calendar, which is determined by the phases of the moon rather than the position of the sun, unlike the Gregorian calendar. It’s celebrated mostly in China, as well as many other East and Southeast Asian countries. The ten days before the new year, homes are cleaned and purified to remove any lingering bad luck. The new year’s eve and day are spent honoring family traditions, ancestors, and religious ceremonies.

“Lunar New Year is a pretty big deal in our family,” said senior Cindy Dong, “the dinner table would be covered with an assortment of veggies, meats, and dishes for our annual Lunar New Year hotpot.”

Good food is a time-old tradition when it comes to any holiday, but foods eaten together on the night of Lunar New Year, such as hotpot, are prepared and enjoyed as a group effort which is a tradition that brings families together. Children are also especially enthusiastic about the holiday as they get to receive plenty of treats and sweets throughout the celebrations.

“At the end of the night, my brother and I always looked forward to receiving 红包 [or red envelopes] from our parents and relatives,” said Dong. The iconic red envelopes given to children from their elder family members contain small amounts of money to symbolize the generosity and kindness everyone should uphold throughout the year. Traditional foods, togetherness, and colorful lanterns are all flaunted as people welcome a fresh start to their lives.