The return of Brood X. 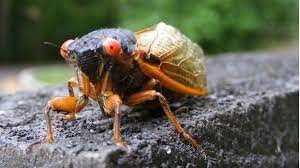 Periodical cicadas are a unique breed of bug in North America. With their distinct noise that they make and  creepy red eyes, cicadas have either annoyed or endeared themselves to people all over the States, and millions have returned this spring for another year of pain and suffering, or minor annoyance, depending on people’s opinions. But why do they do this, where were they hiding, and why is their return important?

Cicadas, or by their subspecies names Tettigarctidae and Cicadidae, are a species of bug that stand out due to their far apart wide eyes, short antenna,  membranous wings, and most famously, the sound they make. That rattling jingle that has ingrained itself into our minds. They make this noise to both repel birds and to attract mates. The cicadas make the sound by contracting tymbal muscles, which make the muscles buckle, creating the sound. Cicadas can get as loud as a lawnmower.

Speaking of mating, once they do what two consenting adult bugs do, cicadas put their larva in the ground and die. Once they hatch, and mature , they emerge from the soil, they only live for 5 or 6 weeks. During those weeks, they mate, get eaten, and annoy us all. After mating, they lay their eggs in trees and the females can lay up to 600 eggs. The baby then splits its skin open and becomes an adult, leaving the shell to sit as a memento for when they’re gone.

Now, this spring, they’re back as Brood X, and much larger than normal. Numbering in the billions, this batch has been waiting underground since 2004. It is officially time to cry, in despair or joy. You won’t have to cry about being stung or bitten but they have prickly feet.  Brood X will only last a few weeks and once they are gone, we can rest easy for another 17 years.