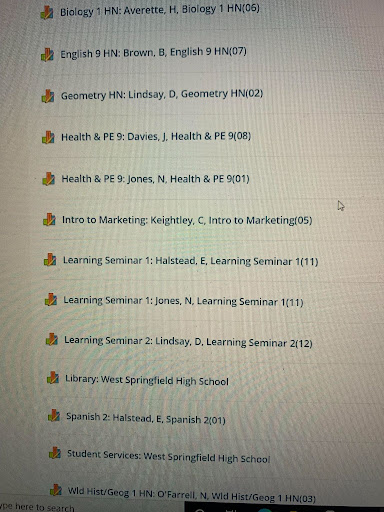 Koyyalamudy’s Schoology showed that she was in both Jones’s and Davies' health and PE classes. The glitch in Schoology successfully worried Koyyalamudy as she realized she would have schedule conflicts she needed to resolve.

With record-breaking enrollment, all grade levels are dealing with schedule conflicts as the administration tries to organize the immense number of students attending this year.

“There are so many people,” said junior Anastasiia Goi, “walking through the hallway is horrible because there are swarms of people trying to get to places.”

With the transition from online to in-person learning, students have slowly realized that having their schedules adjusted is much harder than previously anticipated. Online, students could easily switch in and out of classes since they were being moved through virtual classrooms. Reversely, during in-person learning, schedule changes are limited due to space limits and COVID-19 guidelines. This has resulted in a substantial amount of schedule conflicts afflicting the student body.

“I had gym two times in my schedule,” said freshman Nikita Koyyalamudy. “I was pretty worried because we were going into high school, so I started asking a lot of my friends if they had the same problem but no one did so I was a little nervous.”

Last year WS was a pilot school for the learning management system, Schoology, and this year FCPS decided to continue that application and mass implement it into the county. Students are struggling with mishaps not only in their physical schedules but also on their online platforms. Schoology and SIS StudentVUE have given improper records of schedules as the systems try to organize and handle all the students. Some students weren’t even informed by their counselors about the conflict.

“I heard about it [my schedule conflict] from a friend with the same conflict,” said junior Thomas Seeger. “He was told by his counselor. Then I wrote emails to both of my teachers asking if they had any ideas. I expected that I would hear from my counselor about the conflict as well, but I never did. Although, once I contacted my counselor, she was very helpful.”

One of the most common schedule conflicts is singleton classes, which are classes that only offer one out of eight sections for that class. Consequently, counselors barely have any wiggle room to manipulate the schedule versus a class that offers eight different sections. There are limited options for resolving schedule conflicts and the administration has been trying to find creative solutions to help students, but oftentimes students have to pick the best of the worst.

“Sometimes there’s not a great solution and students just have to make tough choices,” said counselor Nora Covert. “There is nothing they did wrong or something they could’ve done differently to prevent it, it’s just the way the numbers prevent them.”

Despite the schools creating a master schedule based on course requests during academic advising, course changes later in the year can also affect schedules. Since the hiring process of teachers is based on the demand for classes, if students decide to start switching their schedules there isn’t proper room or faculty to support those changes.

“This year some classes have state-mandated caps, a lot of times for safety reasons if there is special equipment or the academy classes,” described Covert, “Some problems are also space in rooms, we can’t physically fit the [number] of desks we want to in rooms.”

With staff changes also occurring, some students now have had multiple counselors. Although counselors are intended to remain with the same students during the entirety of high school, a variety of issues occur that can interrupt that process, such as relocations and new job offers.

“My counselor left and the administration didn’t even tell me he left. I heard about it from a friend, so I had to go on the website to find my new counselor’s contact information,” said junior Grace Slovensky.

Although communication was lacking in some areas of the schedule-making process, some teachers have stepped up to accommodate their students by trying to find solutions and working through their students’ needs.

“Ms. Nash, the theatre teacher, was willing to let my friend and I take theater three during a different period, so I’m mixed in with the theater two-class,” said Seeger.

There has been an array of schedule conflicts, from system errors, double-booking, and lack of classroom space. Most schedule problems were fixed before the beginning of the school year, but that does not mean students were not handling issues up until the last minute.

“My counselor was good at informing me but it took them so long. They always take so long but I feel like counselors should answer right away,” stated Grace.