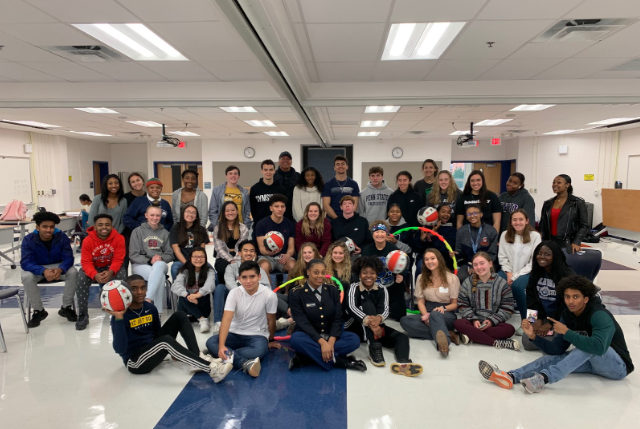 FCA members gather with Tanya Crevier after she spoke, performed, and prayed for the club.

Basketball handler and inspirational speaker Tanya Crevier truly is “spintacular.” She is in the South Dakota Sports Hall of Fame, played in the WNBA for multiple years, and on top of that, she has been named many times as the world’s finest female basketball handler; She has traveled to all fifty states and over thirty-five countries to show off her skills. However, Crevier credits all her success to her personal relationship with God and her strong Christian faith.

“When I was training to play Women’s Professional Basketball, I felt like, even though I was at “the top of my game,” I was empty on the inside. My older brother, Marc, shared the Gospel with me and I prayed right in his office to accept the forgiveness of Jesus Christ and asked Jesus to be my personal Savior & Lord.  I knew at that time that my faith in Jesus would always be the most important thing in my life. Now I have a reason to practice. Now I have a reason to sacrifice. Jesus Christ in me is the Hope of Glory. All that I do, I do to honor & glorify HIM!” said Crevier.

Crevier came to visit the Fellowship of Christian Athletes here at WS on January 16th, 2020. She spoke to the members about her life as a female athlete and how her faith helps her to become better in basketball handling every single day. Crevier has made determination and perseverance pillars of her work ethic success story because no matter what challenge she faced, she knew with strength and courage she would achieve anything.

Crevier grew up in a large family of twelve brothers in sisters in South Dakota. She was always playing sports or being active with them, so her love for athletic stimulation has been instilled in her since a very young age. However, with competition and inspiration, her interest in athletics transformed into a passionate and successful career.

“My older brothers were playing College Football at Ashland University, where they knew the Basketball Coach,  Bill Musselman. Coach Musselman had his players involved in doing lots of ball handling drills – including spinning the basketball. One of his players, in particular, was George Schauer,” said Crevier, “George ended up being my inspiration. My older brothers would constantly tell me stories about George and what he could do with the Spinning Basketball.  I wrote down almost all of the drills and decided that I wanted to learn each one. I knew that becoming a better basketball ball-handler would enhance my playing ability as well.”

Like all great athletes, Crevier has faced her own internal and external struggles. Crevier experienced judgment and skepticism about her abilities because female athletes, in the age that she grew up in, did not have the same opportunities as male athletes did. Nonetheless, Crevier looked beyond the mountains of adversity and saw her bright future, with the help of her God.

“Most people back in my hometown never thought I would “make it” in basketball.  Many told me “you’re too short”. However, God had a plan. It’s like God allowed me to see how special I am, by the coaching of my parents and close family. Using my talents to glorify Jesus and encouraging others is the way I overcome those struggles,” said Crevier.