Extra! Extra! Read all about The Oracle 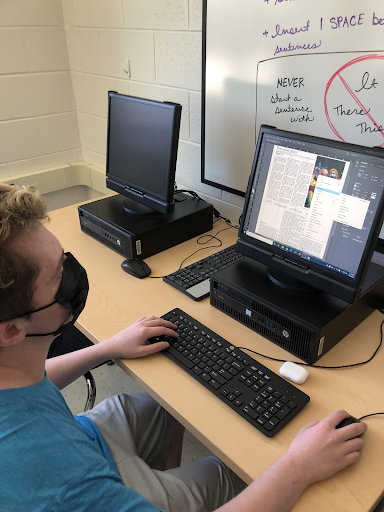 Sophomore Ben Bradfield works through the process of page design in InDesign.

In commemoration of another school year gone by and another year of The Oracle, a behind-the-scenes look into the workings of WS’ favorite student-run newspaper is in order.

“So first, to start off an issue, we meet with the whole class and we just brainstorm everything we can think about,” said staff writer and senior Chloe Jad. “Then we whittle that down and staff members will choose which [story ideas] are the most interesting, and which will be the most timely when the paper comes out a month later.”

The process of producing The Oracle is a lengthy and time-consuming one. Issues are released monthly, and many steps must be completed within a short time frame to bring the paper to fruition and into students’ hands.

“After [assigning stories], we set dates for how long we can spend writing and editing stories which takes some time because there’s a lot of tweaks that have to be made and we have to follow our style guide,” explained Jad.

Questions surrounding stylistic choices utilized by The Oracle can be answered by the style guide, a short but not so sweet manual that confuses new staff members and pisses off veterans alike. Guidelines such as downstyle (only capitalizing the first letter of headlines), pronoun agreement, and publication italicization are outlined in the guide, all of which must be followed by those writing for The Oracle.

The final step after writing and editing is designing the pages of the newspaper, using an Adobe program called Indesign. Each page is meticulously arranged by hand in a process that takes hours of attention to detail and beady eyed squinting at the screen to ensure that text boxes are lined up and the proper amount of white space—but not too much—has been allotted.

“We design the entire page, we put the photo boxes and the text boxes, we have to format it a certain way to satisfy the style guide,” said Jad. “Then as a class, we review those for mistakes, and then we send it off to print and then The Oracle gets delivered to the students.”

By “we,” Jad is referring to the Oracle staff, which is comprised of editors-in-chief, editors, staff writers, and in the last quarter of the year, contributing writers who are in their first year of journalism and don’t plan to return the following year. Each member of staff is assigned certain duties based on their position. For example, the news editor edits stories that fall into the news section of the publication, designs the news section page (or pages) in Indesign, and writes stories individually. Staff writers have the same responsibilities but don’t have a specific section to edit or specific pages to design.

“We don’t have a whole lot of people on staff so most of our people on staff have their own section to edit. But this year, we got some additional staff writers, which has been really helpful,” said editor-in-chief and junior Anisha Iqbal.

Iqbal is one of two editors-in-chief, the most senior position on staff. General tasks such as writing and editing are shared by all members, but the editor-in-chief station has an additional load of responsibilities, such as conducting staff meetings, laying out the month’s schedule, and assisting fellow editors and writers. Expert knowledge of the style guide and Indesign is a required asset necessary for the job.

“Basically, we make decisions for the staff, like how many pages [we are publishing]. For next year, we [also] started planning on some changes we’d like to make, like maybe altering the different sections,” said Iqbal. “We’ve been able to up our page numbers for this past issue. In the future or next year we’re hoping to consistently [publish] 16 pages and maybe even expand more as we grow.”

The Oracle has been able to reach new heights this school year due to the amount of fresh Journalism 1 students writing as contributors. To write for The Oracle, students must take journalism and can have a chance to write even if not on staff. J1s, or journalism one students, can either be promoted to staff by taking journalism for a second year or by being promoted in their first year, an achievement attained by especially proficient writers. Even so, students who take journalism but aren’t on staff have the opportunity to publish stories as contributors, as opposed to staff writers.

Now that you can practically see the tired, strained eyes, hear the furtive typing and heated debate over whether an article idea is timely enough to publish, feel free to speak up the next time you hear someone complaining about how only two pages are in color. The journalism program is made up of a dozen teenagers running the whole shebang, not stacks of money devoted to making sure everyone is satisfied.

“[We] have [a] pre-approved budget for each issue,” explained Iqbal. “We can’t change things like [colors] mid-year, but for next year, we’re hoping to increase the colors.”

Despite the struggles that come with managing The Oracle, everyone on staff is unanimous on the fact that all difficulties endured become worth it once crisp stacks of the paper are delivered to the journalism room, ready for distribution. The independent yet collaborative nature of writing for The Oracle is a formative experience that has helped to shape members’ world views as well as sharpen writing skills.

“[Writing for The Oracle] has given me such a diverse perspective on the school body, on interacting with colleagues and peers, and how I work in a group where my hand isn’t being held,” said Jad.

Do yourself a favor and don’t forget to take home a copy (or two to give to your family) as a physical memory of the 2021-2022 school year, or just to thank the students who worked so hard to get it to you.