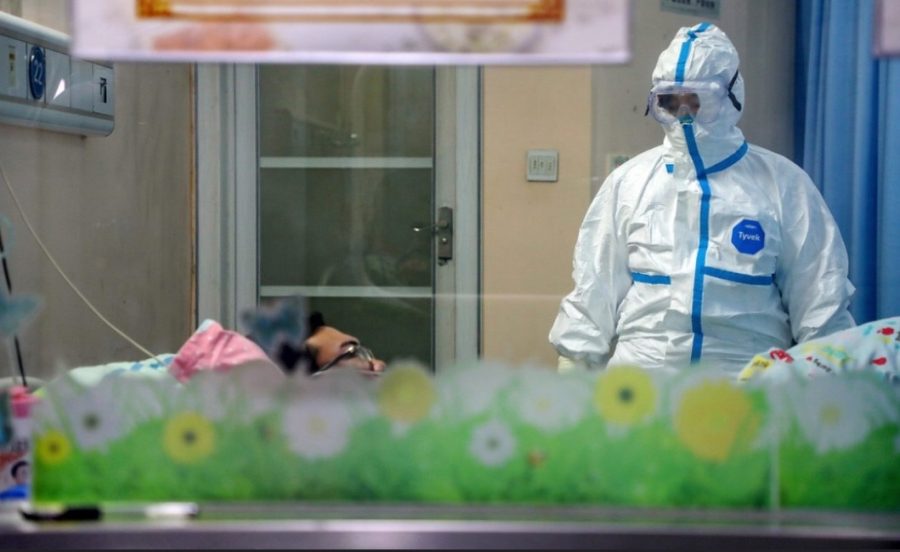 A doctor treating a coronavirus patient in the new Thunder God Mountain Hospital that was constructed in late January for the treatment of the coronavirus. Doctors have to fully cover all skin, as the virus is highly contagious.

THE FOLLOWING ARTICLE WAS WRITTEN IN EARLY MARCH, NEAR THE BEGINNING OF THE COVID-19 OUTBREAK IN THE U.S.

AT THE END OF THE ARTICLE ARE THE MOST RECENT STATISTICS AS OF JUNE 9TH, 2020.

It has been given the name novel coronavirus or COVID-19. A virus that has turned from an epidemic to a pandemic and taken the lives of over three thousand victims. What exactly is the coronavirus outbreak?

The coronavirus is an illness that is commonly found in wild animals but sometimes can be transferred to humans. It is said to have started in the city of Wuhan in the Hubei district of eastern China at the Huanan Seafood Wholesale Market, a fish market where illegal wild animals were sold. The consumption of those wild animals led to the transmission of the virus to human beings. Since the coronavirus outbreak, Chinese officials responded to the virus by banning all trade of wildlife animals in markets, restaurants, and online shopping sites.

The virus has caused over 3,000 deaths with over 93,000 confirmed cases.  The deaths first occurred in China, specifically in Hubei province, where it started. However, cases of the virus around the world have taken place in at least 78 countries and territories, Italy and Iran having the highest infection rate.

“I feel sorry for those who were affected by the virus and especially those who passed away as a result of the illness,” said sophomore Duwa Mojadiddi.

Officials say that the coronavirus is spreading faster and is more complicated than the former SARS epidemic, which killed 744 people. The coronavirus is extremely fast-growing due to its easily transmittable characteristic. It can be transmitted from human to human by coughing or sneezing within 3-6 feet of the patient, as well as physical contact such as shaking hands. It can also be passed on to anyone who touches a surface that someone with the coronavirus has touched. The best way to protect oneself from the virus is to wash hands often and keep healthy hygiene practices.

The coronavirus can be easily mistaken for the flu, as the symptoms include a fever, coughing, muscle pain, and breathing problems. However, in severe cases, it can also cause pneumonia, kidney failure, and severe acute respiratory syndrome. It usually takes up to two weeks for the symptoms to show, but the virus can be spread to others during that period. In severe cases, it can even lead to death. However, doctors are reporting that the majority of people that have died are the elderly and those who already have other health issues.

On January 23, Wuhan was placed under lockdown and all flights, trains, and long-haul buses into and out of the city were suspended. By the end of January, 15 more cities in Hubei province experienced similar lockdowns, prohibiting over 57 million people from leaving the province. However, an estimated five million people already left Wuhan before it was put in lockdown.

“This could lead to more spreading of the virus, but governments should already be aware of this and should have emergency quarantines ready to go in case,” said senior Rama Skan.

Li Wenliang was the 34-year-old whistleblower doctor who was the first to sound the alarm on the novel coronavirus in late December. It started with a text to his medical school alumni group about seven patients from a local seafood market who were showing symptoms of a SARS-like sickness at his hospital in Wuhan. After a screenshot of his text went viral, local officials arrested and silenced him, blaming him for “spreading rumors.” In the coming weeks, he was among those who fell victim to this deadly virus while treating another patient. Leaving the world and Chinese community in grief and anger, Wenliang died on February 7th from the Wuhan coronavirus he had first announced and has become a Chinese hero.

“I think it’s messed up that he got arrested. His job as a doctor is to help cure and treat patients,” said Mojadiddi. “He clearly found a disease and was only just trying to help.”

Two hospitals were constructed for the treatment of the coronavirus and many other large buildings are being used as makeshift hospitals as the virus continues to spread. There is hope for those who have been infected, as there have been over 50,000 global recoveries. There is still no cure to the virus, but laboratories around the world are working to find one.

Three large cruise ships with suspected cases in China and Japan were stopped. The infected were taken to the hospital and the rest were put under quarantine for two weeks.

“Governments should warn their citizens and provide proper information on how to avoid the virus,” said Skan. “They should also provide hotlines so that citizens could report a possible case of coronavirus as well as get hospitals ready in case of a local outbreak.”