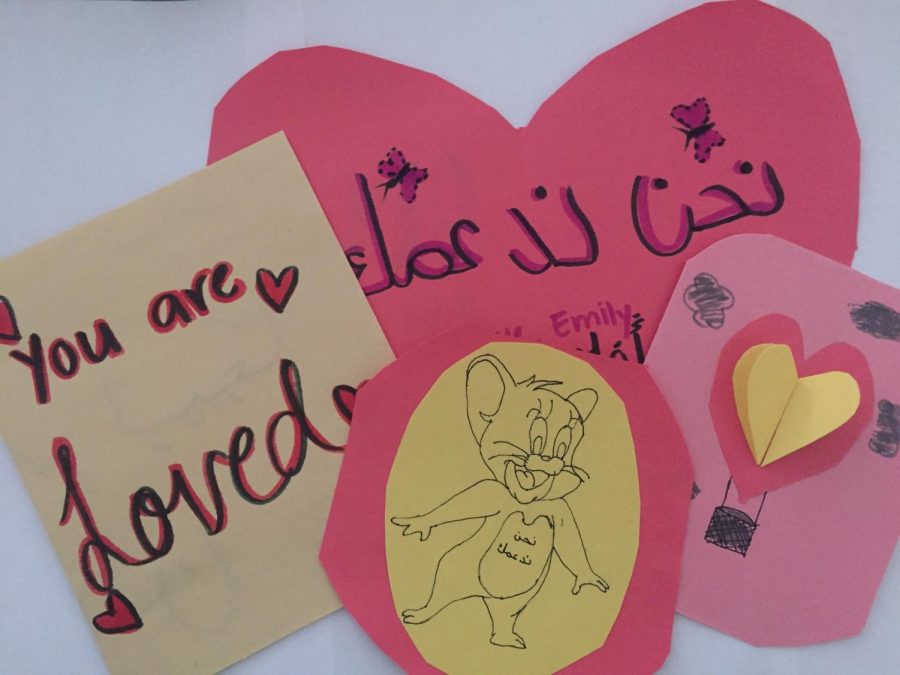 Heartwarming cards of support members of SWV made to send to victims of war in Yemen. They were written in both English and Arabic for understanding purposes. Arabic phrases with English translations were displayed on the board for club members to choose and write down.

WS senior Salwa Zahid was awarded the Fairfax Student Peace Award early this March in recognition of her efforts to bring peace to others’ lives.

The reception to honor the recipients of the 2020 Fairfax Student Peace Award was held on March 1st. U.S. Representative Gerry Connolly, Vice-Chair of the Fairfax County Board of Supervisors Penny Gross, FCPS at-large board members Abrar Omeish and Karen Corbett Sanders, and FCPS Board Members Karen Keys-Gamarra and Melanie Meren were there to honor the recipients of the award.

As a junior, Zahid co-founded the Spartans for War Victims student-run organization (SWV) at WS to aid and assist civilians living in war zones who are severely affected by the war. Along with hosting clothing drives, food drives, and fundraisers to support victims of war living around the world, SWV also organizes awareness meetings, where they discuss the conflicts still existing today and its effects on civilians in war-torn countries. Through this, they are also calling for an end to wars and promoting peace around the globe.

Q: What inspired you to start this club?

Salwa: I’ve always wanted to do more for those affected by war who don’t have the luxuries that we have. I feel that everyone is responsible for helping others because we are all here on this Earth together, and as humans, we should stand with each other and support one another in times of conflicts. What really inspired me was seeing first hand the effect of war on the civilians while on a trip with my family to Afghanistan. I witnessed little children collecting the ends of bread loaves to support their family. I saw families torn apart due to the four-decade-long war. When I returned to the U.S., I wanted to help war victims as much as I could. So, I decided to create SWV in order to fulfill that on a smaller scale. I had wanted to make the club for a while, but after first-hand witnessing the effects of war on innocent civilians, it further motivated me and provided that determination to create this club.

Q: What has the club done this year?

Salwa: Some of the activities SWV did this year include hosting a winter clothing drive to those internally displaced in Afghanistan, an awareness workshop meeting discussing the current armed conflicts around the world and their effects on the civilians, making cards of support for war civilians in Yemen, and also hosting a canned food drive for victims of war in Yemen (the cards were to be sent with the food). We were planning on writing letters for change to our senators and Congress representatives for more support for refugees. In addition to that, we wanted to hand out ribbons for Genocide Awareness and Prevention Month, and have a cultural day to display a brighter side of the countries in war, who’s conflict is the only side shown in the media. However, due to school closure, those will have to be delayed till next year.

Q: What are your plans for the future moving forward?

Salwa: As I am graduating in the near future, I hope Spartans for War Victims continues to grow and improve the lives of those around the world. As for myself, I will continue to do the work I do and find as many ways to help those affected by war as much as possible.

Q; What is your message to others?

Salwa: If there is absolutely nothing you can do to help those affected by war, you can still spread awareness. Even if it’s just telling your friend about it, it will make a difference, because the more the people know about the situation that millions of war victims around the world face, the more the people will help to change that situation and positively impact the lives of those war victims. We should try to help others as much as we can, even if it is the smallest act, for the smallest act of kindness can make the biggest difference in someone’s life.

The club’s twitter (@swv_wshs) provides updates and announcements related to the club’s purpose.