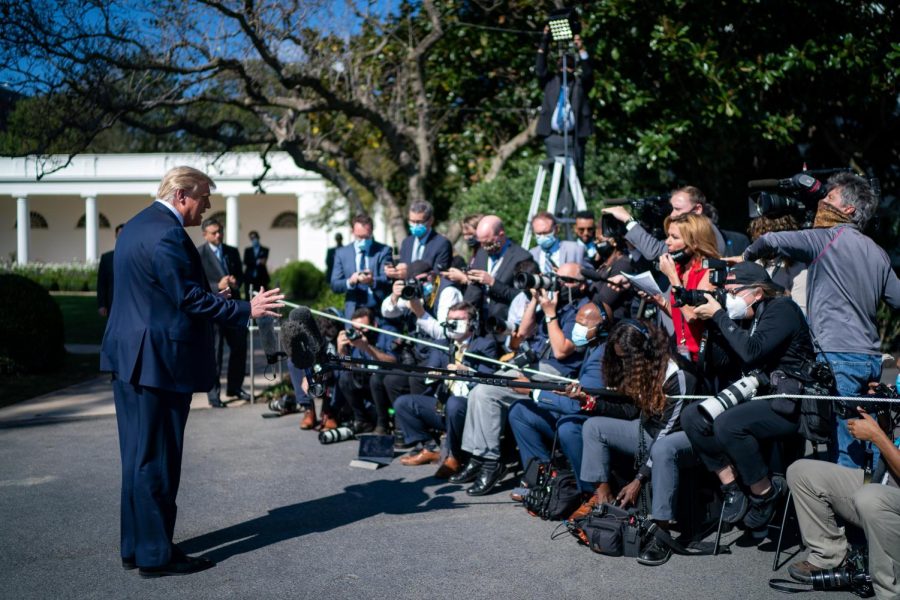 Photo by Tia Dufour via Wikimedia under Creative Commons License

President Trump addresses the media before leaving for Maryland on Tuesday.

Trump’s positive result followed a busy week of campaigning and the debate on Tuesday. Both raised concerns among health officials over possible outbreaks due to his reluctance over wearing a mask. After finding out, both Vice President Mike Pence and former Vice President, and current Democratic candidate for president, Joe Biden were tested for coronavirus. Both had negative results. Pence was tested because of the long contacts he has had with Trump and Biden was tested because of the debate on Tuesday.

Joe Biden tweeted after Trump’s positive test result, “Jill and I send our thoughts to President Trump and First Lady Melania Trump for a swift recovery. We will continue to pray for the health and safety of the president and his family.” Senator Kamala Harris echoed Biden’s remarks by tweeting, “Doug and I join Joe Biden and Dr. Biden in wishing President Trump and the First Lady a full and speedy recovery. We’re keeping them and the entire Trump family in our thoughts.” The Biden Campaign also shared that they will stop streaming negative ads of the president, after it was announced that Trump was being taken to Walter Reed. Biden tweeted around the same time, “This cannot be a partisan moment. It must be an American moment. We have to come together as a nation.”

Joining the former Vice President, world leaders also wished the president a speedy recovery. Prime Minister Justin Trudeau of Canada tweeted that “Sophie and I are sending our best wishes to [President] Trump and [First Lady Melania Trump]. We hope you both get well soon and have a full recovery from this virus.” Prime Minister Boris Johnson of the United Kingdom, who has had COVID-19, also tweeted, “My best wishes to President Trump and the First Lady. Hope they both have a speedy recovery from coronavirus.”

Dr. Sean Conley, the president’s physician, released in a statement: “The President and the First Lady are both well at this time, and they plan to remain at home within the White House during their convalescence.” Dr. Conley also shared that the president was taking “a single 8 gram dose of Regeneron’s polyclonal antibody cocktail.” Chief of Staff Mark Meadows told reports on Friday that the president “has mild symptoms.” Meadows also stated that “the American people can rest assured that we have a president that is not only on the job, will remain on the job, and I’m optimistic that he will have a very quick and speedy recovery.”

At a press briefing on Friday, White House Press Secretary Kayleigh McEnany shared, “Out of an abundance of caution, and at the recommendation of his physician and medical experts, the President will be working from the presidential offices at Walter Reed for the next few days.” She also stated, “President Trump appreciates the outpouring of support for both he and the First Lady.”