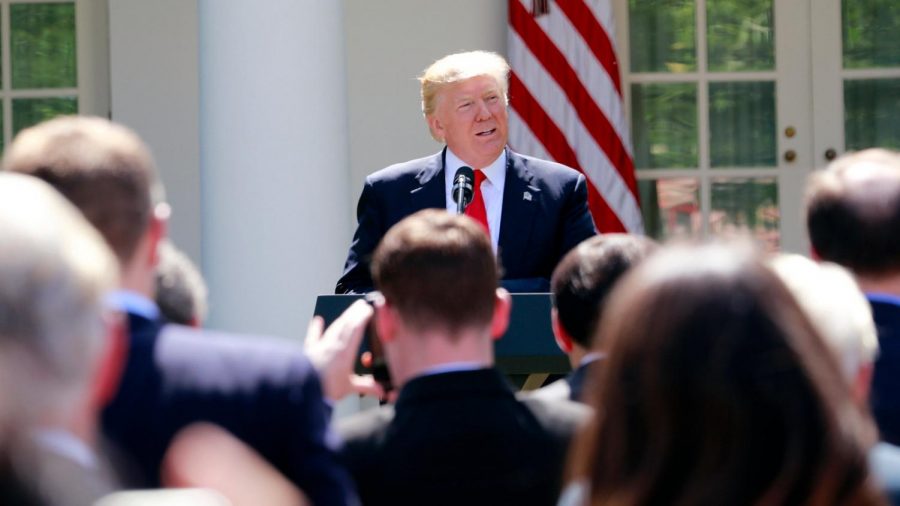 Courtesy of The New York Times

On November 4th, 2020, the United States formally left the Paris Accord, just two days after the Presidential election.

In the midst of the craze surrounding our country’s presidential election, a major event has largely slipped through the media coverage. The United States has officially left the Global Paris Climate Accord.

The Global Paris Agreement is an organization founded in 2015 and adopted by all 197 countries in the world aiming to fight the effects of climate change and global warming. The group’s main focus is to limit greenhouse gases as much as possible and stop the global temperature increase to below two degrees celsius above pre industrial levels in the 1800s. The climate accord sets global standards for emissions and develops commitments by major countries to help each other decrease their environmental impacts over time.

The United States first formally joined the Paris Accord back in September of 2016 by executive action under President Obama. The agreement needed enough countries to formally agree to the accord to account for at least 55% of total global emissions to take full effect. This goal was met, and the accord took full effect in November of 2016, right around the time of the 2016 presidential election.

Following President Trump’s nomination in 2016, he attacked climate change as a hoax and announced he would make efforts to withdraw the United States from the Paris accord in 2017. Due to measures set in place regarding exits from the agreement, the earliest date the United States could leave the Paris accord was November 4th, 2020, just two days after the election.

Despite an overwhelming majority of Americans that support the Paris accord and to take action against climate change, Trump and his administration pulled the United States in the opposite direction and successfully withdrew from the agreement.

“The US, through taking its own way forward, can provide new alternatives to the climate change agenda without being influenced by foreign powers. I believe that the US has a lot of potential to provide answers and change for our planet that will make future generations healthy and happy,” said senior Lars Griffin. Without the outside influence of foreign powers, we can accurately address the issues within the US without getting bogged down with special foreign situations,” said Griffin.

What does this mean moving forward? With the likely outcome of President-elect Joe Biden becoming the next president of our nation, democratic platforms have been more keen to adopt a larger group effort against climate change opposed to a solo focus. Despite the measures taken to limit how quickly a nation can exit the Paris accord, countries can rejoin in as quick as one month. Joe Biden has already promised that he would immediately set plans to rejoin the Paris accord as soon as possible with a victory in office.

“I think the US leaving the Paris accord is [kind of] selfish because it reduces other counties’ emission space and raises their emission costs especially since the US is a major contributor of emissions, and they would not be paying their fair share, making it more difficult for developing countries,” said senior Alex Lopez.

Without the outside influence of foreign powers, we can accurately address the issues within the US without getting bogged down with special foreign situations,” said Griffin.

The final outcome of the presidential election is going to determine the direction of the United States’ focuses, and the future of our nation’s influence on the fight against climate change.