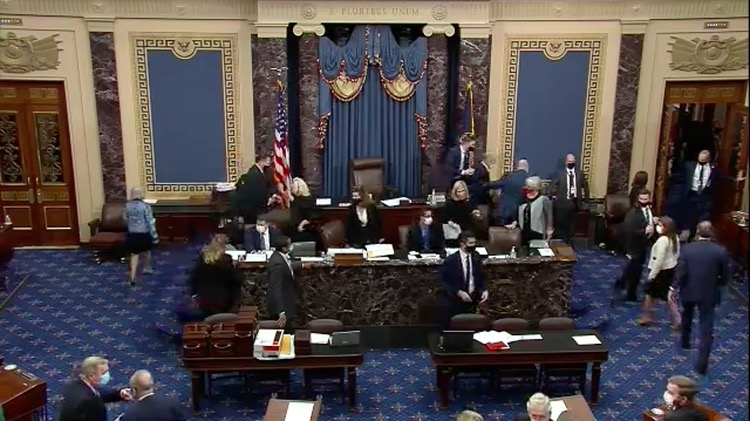 Senators are evacuated as the hallways were breached by insurrectionists.

Rioters protesting the results of the election breached the Capitol Building shortly after the first objection to the election results was made.

The president said that “you’ll never take back our country with weakness, you have to show strength. You have to be strong.”

Congressmen and congresswomen were forced to be locked down in their own offices or a secure location. Vice President Mike Pence, House Speaker Nancy Pelosi, and President Pro Tempore of the Senate Chuck Grassley were all evacuated from the Congress.

Rioters breached security gates lined with law enforcement officers and physically broke into the building by shattering glass and ramming doors. After entering the building, they began confronting Capitol Police. In the Capitol’s crypt, there was a physical brawl between the rioters supporting Trump 2020 and police. Throughout the building, rioters broke into offices and destroyed or stole personal papers. A man even broke into the Upper Chamber and posed in the seat of the President of the Senate.

The rioters also waved a Confederate flag, both within and without the building, and hung Trump 2020 flags inside the building and along the Capitol’s walls.

As the day progressed, Governors Ralph Northam of Virginia, Larry Hogan of Maryland, and Andrew Cuomo of New York all sent their national guard to help the defense against the rioters. The Pentagon, working with congressional leaders and VP Pence, approved D.C. Mayor Muriel Bowser’s request for the national guard of D.C. to be mobilized in response to the rioters. Bowser and Northam initiated curfews in D.C. and its surrounding areas to quell the violence.

In the evening, the rioters were removed from the Capitol and it was reportedly secure. It was agreed upon by leaders of the House and Senate to resume the proceedings to approve the results of the Electoral College. “I want to say to the American people, the United States Senate will not be intimidated,” said the Senate Majority Leader Mitch McConnell. “We will not be kept out of this chamber by thugs, mobs, or threats. We will not bow to lawlessness or intimidation. We are back at our posts. We will discharge our duty under the Constitution and for our nation. And we’re going to do it tonight.” The statement was shared on the floor as the Senate resumed its session to approve the vote of the Electoral College.

“This mob was, in good part, President Trump’s doing — incited by his words, his lies. This violence, in good part, his responsibility, his everlasting shame,” Said Senate Minority Leader Chuck Schumer. “Today’s events, certainly, certainly would have not happened without him. Now January 6 will go down as one of the darkest days of recent American history, a final warning to our nation about the consequences of a demagogic president.”