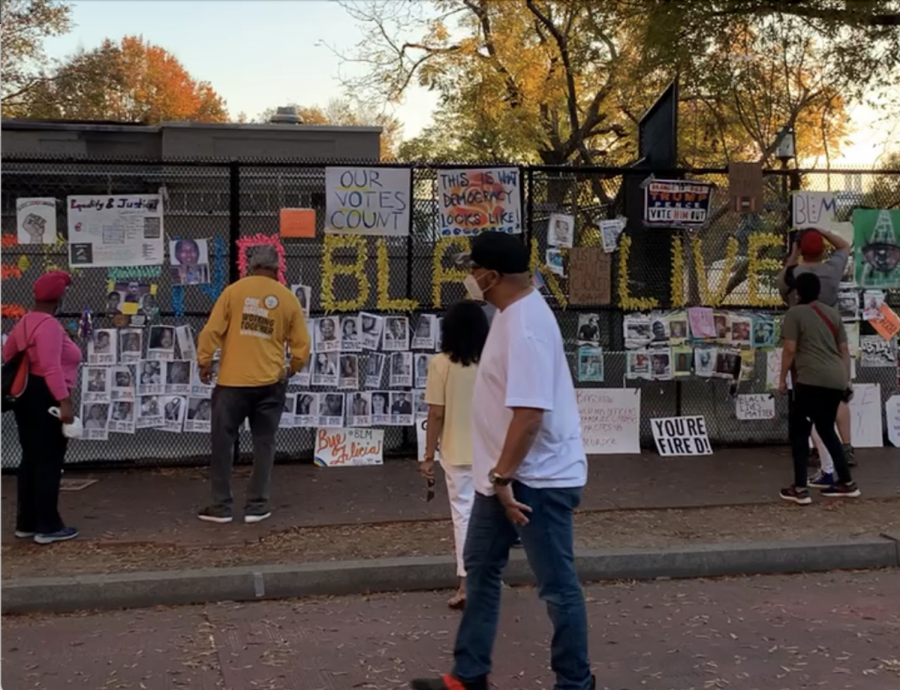 On H Street in Washington, DC, signs commemorating the Black Lives Matter movement fill the streets in solidarity for the Black community after all the losses they have faced.

Instances of police brutality enraged the country after the innocent lives of George Floyd, Breonna Taylor, and Ahmaud Aubrey were notoriously taken about a year ago. As the issue remains rampant nationwide, the conviction of Derek Chauvin has led many to believe that change is in fact possible.
Former officer Chauvin’s guilty sentencing on all three counts of second and third-degree murder and second-degree manslaughter is noteworthy since this trial is amongst one of the first to hold an officer accountable for such fatal actions. This type of verdict is exceptionally rare with only five percent of officers arrested on charges of murder or manslaughter receiving convictions from last year. It is still arguable whether actual justice has been served because policy change has yet to be established to prevent officers from committing more of these crimes.
“The guilty verdict [is] well deserved, however, this sentencing is just the beginning going forward with consequences for police brutality,” said sophomore Hermela Moges, “from now on I [hope that] the consequences will be harsher and taken more seriously.”
In the past few months and even weeks, continued instances of police brutality have been uncovered. Victims such as Christian Hall, Adam Toledo, Daunte Wright, and Ma’Khia Bryant have all lost their lives at the hands of police officers. These deaths were especially upsetting as each of the victims was aged 20 or younger, with the youngest being Toledo at age 13.
“They were all so young and had their whole lives ahead of them, it pains me in my heart to know that the police who are supposed to calmly diffuse a bad situation and protect the youth would do this,” said sophomore Alaa Elhiraika.
Even though these incidents seem to have happened thousands of miles away, police brutality still affects Fairfax County. In 2019, the Fairfax County Police Department (FCPD) created a Use of Force Report which highlights that FCPD officers are statistically more likely to use force in instances involving Black civilians. The pattern is clearly seen when Black residents only consist of 10% of the county’s population but are disproportionately involved in nearly half of all use-of-force incidents.
“I do have fears every day about police violence affecting my parents or even my sister who doesn’t live at home anymore,” said Moges. “It’s terrifying to think about anything like this happening to them, especially from the people that are supposed to protect us.”
Though the pressing issue of police brutality may seem unconquerable, many are advocating for change. Many debates have circulated over the potential methods that could be used to solve this predicament. One of the most popular solutions is the concept of defunding the police.
“I believe in defunding the police simply because reallocating funds from police departments to community policing organizations like public health centers and schools would serve as investments in underserved communities, namely the black community,” said Elhiraika.
Other possibilities would include redesigning police training programs to allocate time dedicated to learning about race relations and monitoring biased behaviors. Another considerable prospect is including specific guidelines for dealing with mental health and disability-related situations. A substantial number of police deaths are the result of a lack of understanding and clear instruction towards these groups of people.
Hopefully, there will finally come a day where the severity of this issue may be ameliorated, but only time will tell. Never should it have taken this many lives to be sacrificed to reach the first step towards justice, but at the very least it has paved the way for many more changes that are yet to arrive.