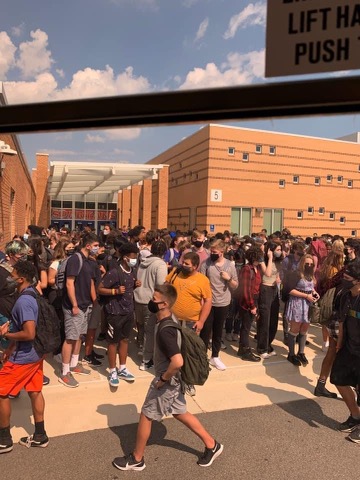 Students crowded around Door 5 waiting for their buses to arrive. Buses all across FCPS have experienced delays and student-capacity issues due to a shortage of bus drivers. The overcrowding for buses also raises safety concerns due to the close proximity of students while facing a global pandemic.

Students finally returned to full in-person school after a year and a half online, but due to inconsistent transportation, many of them are having trouble just getting through the front door.

In regards to county-provided transportation, the first day of school was not executed very well. Multiple buses were late in the morning, which in turn caused select students to arrive late to their first classes of the year. That afternoon, students were forced to wait outside in the blistering summer heat when the majority of buses failed to arrive on time.

Now, afternoon wait times have generally improved in the weeks since, but that doesn’t mean everything is running smoothly.

“At this current time, [we] have 197 driver positions open,” said Assistant Director of Transportation Sherry Dyson. “Our managers and anyone with a CDL who previously drove is being placed on the roads to help get students back and forth to school. This practice is creating significant challenges in our offices. We are not able to answer calls, reply to constituents, or email on time. IF YOU KNOW ANYONE WHO WANTS TO BECOME A BUS DRIVER…DIRECT THEM TO US! Possibly someone who attends one of the local colleges [and] may want some extra money while going to school.”

With the short supply of available drivers, the Office of Transportation had to double up more than 70 different routes at the beginning of the school year. This number has decreased since, but only because of lower ridership and reorganization of routes, and not added hirings. Indeed, many students are now driving to school on their own, which has alleviated some of the pressure for bus drivers. Unfortunately, that arrangement has caused problems of its own.

“So basically my friend was [going to] drive me home and so we [walked] out to his car which is in the upper lot right behind the busses and [there was] another car behind his car basically blocking it in and the bumpers [were] touching and everything,” said senior Jon Scanlan. “Apparently, the battery [died halfway] as she was backing out of her spot, so she had gone inside to the main office to try to get someone to help. It wasn’t the girl’s fault, crazy stuff like that happens all the time, but it was kinda crazy walking out and just seeing a car boxing us in with no one in the driver’s seat.”

Nobody was hurt in the incident and neither car was damaged, but occurrences like that still may have sent a message to the administration. The very next day, WS staff members began personally overseeing the flow of traffic through the parking lot, which has made getting out of the parking lot less dangerous.

Nonetheless, the influx of new vehicles on the road has resulted in nearby roadways being slowed down. Normal afternoon rush hour, combined with the added buses, the increased abundance of student drivers, and factoring in the construction on Rolling Road, altogether make for a rather perilous buildup of traffic.

All in all, while the first day of the year may have been a bit of an aberration, the new normal for school transportation is still far from ideal.