Snowstorm shuts down I-95 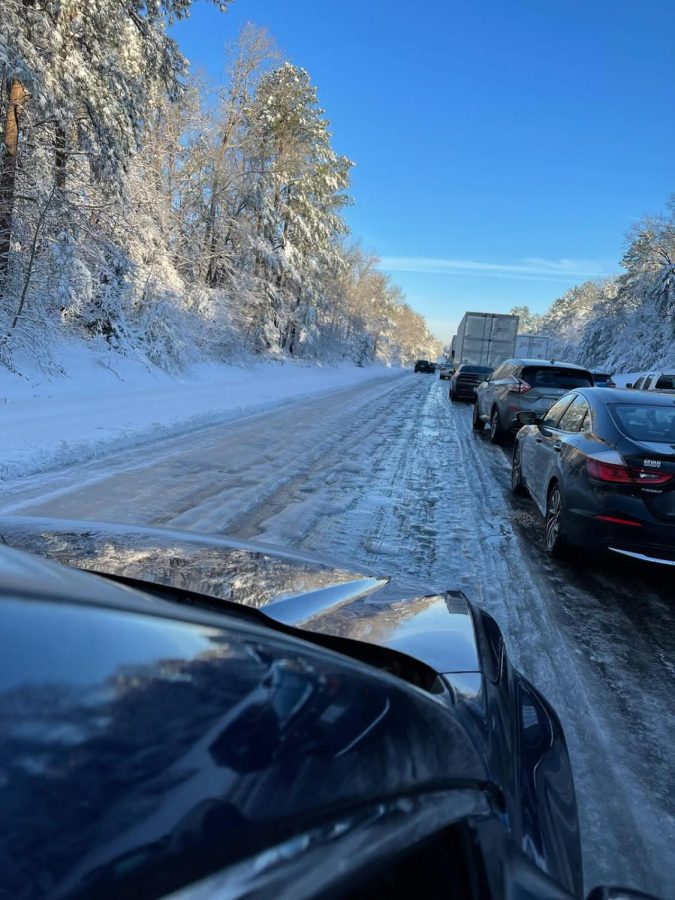 Drivers come to a complete stop on Interstate 95 due to six-eight inches of snow that fell throughout the day on the 4th of January. The Virginia Department of Transportation had 80 miles of roadway in Fredericksburg, Virginia shut down for almost two days.

Large amounts of snow are a rarity in Virginia, but the first weekend of 2022 brought it in bunches. Up to 10 inches of snow fell across the DMV,  and, despite its popularity among most students, created a substantial issue on Interstate 95 A blockage occurred that lasted over 24 hours and drivers were stuck for hours upon hours in the freezing cold.

Even Virginia Senator Tim Kaine was stuck in the snow, tweeting “Update: I’ve been on the road for 27 hours” on the  day after the snowstorm hit. Taylor Thompson, a Northern Virginia native, was leaving Virginia Beach to catch a flight at Reagan National Airport with her one year-old daughter and husband when the snowstorm hit. She ended up spending her daughter’s first birthday on the road.

Then, more problems started to arise from the blockage, which were only magnified by the one year old baby Thompson and her husband had to juggle throughout the confusion. Thompson said there was no cell service to be found by the gas station they stopped at, and inside there was no information about what was happening with the interstate. Almost stranded at an Intersection 95 gas station at 8:30 at night with no cell service and a young child.

“She did pretty well considering she spent her whole birthday in the car,” Thompson recounted. “She obviously got a little fussy as any one year old baby would but overall she was a pretty happy baby!”

Many of the people stuck in this storm missed work, school, or other life events. The Thompson family was no different. They had a flight to Orlando, Florida planned for the morning of the 4th to go to Walt Disney World for an event called the Dopey Challenge, which consisted of four different races on four different days.

“We never even made it to my Mom’s house in Ashburn,” said Thompson, “we turned around and started heading south to Florida at mile marker 111 in Virginia at 10:30a.m. [the next morning].”

The family had to completely bail on their scheduled flight to Florida and drive 12 hours down to the sunshine state to make it just in time for the races, having just one day to spare before the first race.

“We’ve made it [to Ashburn] in three hours with no stops and no traffic but the average is usually around four. [That’s] 21 hours right there from when we left our house [in Virginia Beach] to when we started driving south another 12 hours down to Florida.” said Thompson. “Honestly I have no idea how much longer it would’ve taken [to continue north] because they had shut down I-95 N to clear ice and snow.”

The Virginia Department of Transportation (VDOT) provided updates through their automated texting service, website, and social media feeds. By about 6:00 p.m. on the fourth they were able to clear up most of those who were stranded on the snow covered portions of I-95, but downed trees and power lines still were littered across the interstate. Many neighborhoods and residential areas dealt with downed trees and power lines as well.

Luckily for Thompson, she was on time for all of her Disney World races and the other drivers on I-95 were all home safe soon after they cleared up most of the roads.

“We weren’t going to let the stoppage make us miss our races,” Thompson remarked. “We had been training for too long for that to happen!”