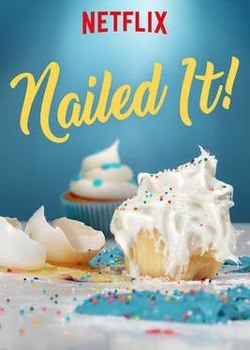 Reality shows are often entertaining because of the high stakes, drama, and competition. However, a stark contrast to these shows is Nailed It on Netflix. The show follows three contestants who face two different baking challenges and then, at the end of the episode, a winner is crowned and wins $10,000. The show is very different from other baking shows because the contestants are completely inexperienced. The contestants are just ordinary people with average (and sometimes below average) baking skills. These contestants are then tasked to replicate desserts that are professionally made and way above their skill level.

The show’s recipe of under-experienced bakers and overly complicated desserts, such as multi-tiered cakes, gingerbread houses, and intricately decorated cupcakes, leads to catastrophic results, which makes the show extremely entertaining. The contestants are given too little time and too little information so there is no way for them to be successful. The judges then assess the contestant’s creations, resulting in ruthless critiques and humorous commentary about the desserts.

Another amusing aspect of the show is the judging panel. There are three judges: Nicole Byers, who is also the host, Jacques Torres, who is a professional pastry chef, and a guest judge that switches every episode. This combination is excellent because Torress actually tries to assess the desserts technically, while the other judges have fun with their critiques. The show’s host, Byers, also constantly brings energy to the show and throws in twists during the challenges to keep the contestants on their toes. Finally, the casting is great every episode. The contestants are relatable, do not take themselves too seriously, and are not overly competitive or cutthroat, which makes it easy to like and root for them.

The show’s satirical concept paired with the fantastic cast creates a fun and lighthearted show which is a nice change of pace for the viewer, compared to other reality shows.

“It’s entertaining because I know I would be struggling just as much”’ said junior Katrina Klopcic.