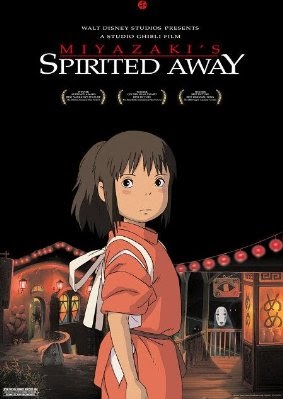 Mystical storylines and stunning animations are what Studio Ghibli movies are known for, and those qualities are brought to life in the Oscar-winning film, Spirited Away. Despite the movie being released nearly two decades ago, it remains a timeless classic and captivating favorite. The story is reminiscent of classics such as Alice in Wonderland and Coraline, sharing the same combination of both the real and magical world that is a treat to watch. The animation is flawless and beautifully drawn, the music heartwarming and unforgettable, and a plot that fits the mold of a classic fairytale.

The animation follows the journey of ten-year-old Chihiro, who gets lost in a spiritual world after following her parents. She discovers that her parents have become trapped in the world and it’s her job to save them before she becomes a spirit herself. The plot seems childish at first sight, but as the viewer continues to watch the movie, the plot thickens.

The movie includes mythological creatures from different countries. Yubaba, the main villain, is inspired by a witch from a Russian fairytale named Baba Yaga and many of the spirits in the story resemble Native American nature spirits. The blend of the different cultures all in a Japanese setting adds to the movie’s uniqueness.

Most animated films from this time period have little detail in them visually, but Spirited Away is an exception. Every character, place, and scene is animated to the smallest detail. The animations are life-like and the spiritual twist to the movie makes it pleasing to the eye.

Each of the characters are unique as well and you can’t help but fall in love with them. Watching Chihiro’s character progress from a naive and clueless young girl to a much stronger individual who can fend for herself is just remarkable. She’s a character that is strong and doesn’t hesitate to take risks for those who she cares for.

The movie is an escape from reality and is a childhood favorite for many. The love and care that was put in by the animators and writers of the story are easy to see. Spirited Away is a masterpiece of animated art.