Swim and Dive: living life in the fast lane 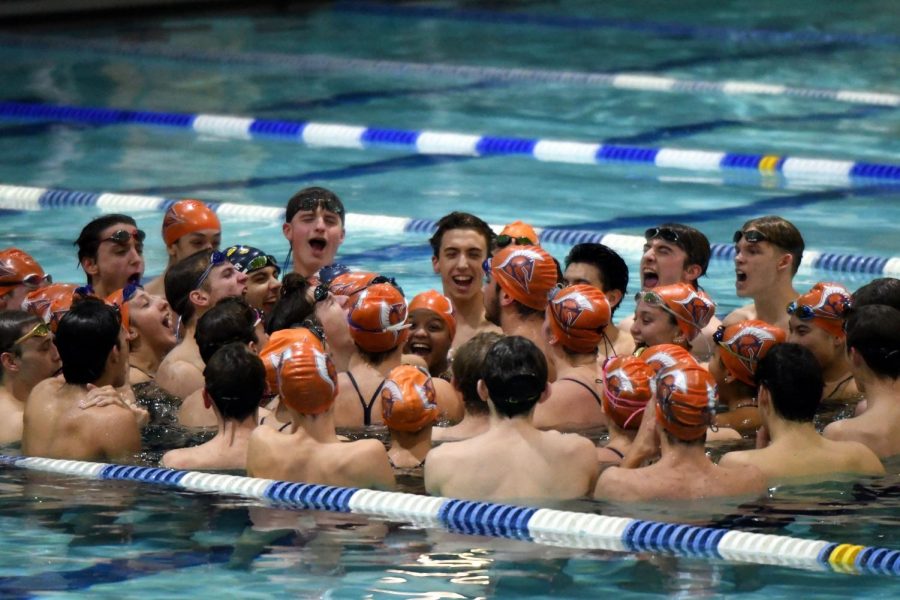 The swim team gathers for their pre-meet cheer in whey they progressively yell louder and louder until they are screaming at the top of their lungs in order to get themselves fired up for their meet.

With every new school year comes big changes, and this year the WS Swim and Dive Team has experienced just that.

With a new season and teammates, perhaps the biggest change to the team is its change in leadership. Both of last year’s coaches, Coach Kellogg and Coach Michael were replaced with a new head coach, Nik, alongside two assistant coaches. Throughout the season so far, the team has had to adapt to their new head coach’s, ways and have learned that with new leadership comes big changes.

“Well things definitely have changed in terms of how connected the swimmers are to the coaches. Previously the swimmers had close relationships with the coaches and that’s not the same anymore,” said junior Alex Lopez.

However, a change in these relationships should be expected as they are strengthened throughout the season. Besides this, there has also been a difference in traditions during practices.

“There have been new things. For example, the coaches added a new tradition of giving a rubber duck to the kids who perform the best over practice for a week,” said senior Paige Kasemsuwannakaeth.

While undergoing these changes may have been difficult for some, others have had positive experiences.

“I like the fact that everyone has a healthy level of competition towards the sport but having fun always seems to be the most important thing on everyone’s mind,” said senior Sorab Aman.

Additionally, with the help of this year’s coaches and last year’s, some seniors have already been able to commit to swim at colleges for their next four years.

“Nothing really changes after being committed, but that sense of accomplishment and relief does feel nice,” said Aman, who recently committed to swim next year at George Mason University.

Even though there have been some alterations, the WS Swim and Dive team still remains a special place and community for all of its participants.