Spikeball club is here to stay 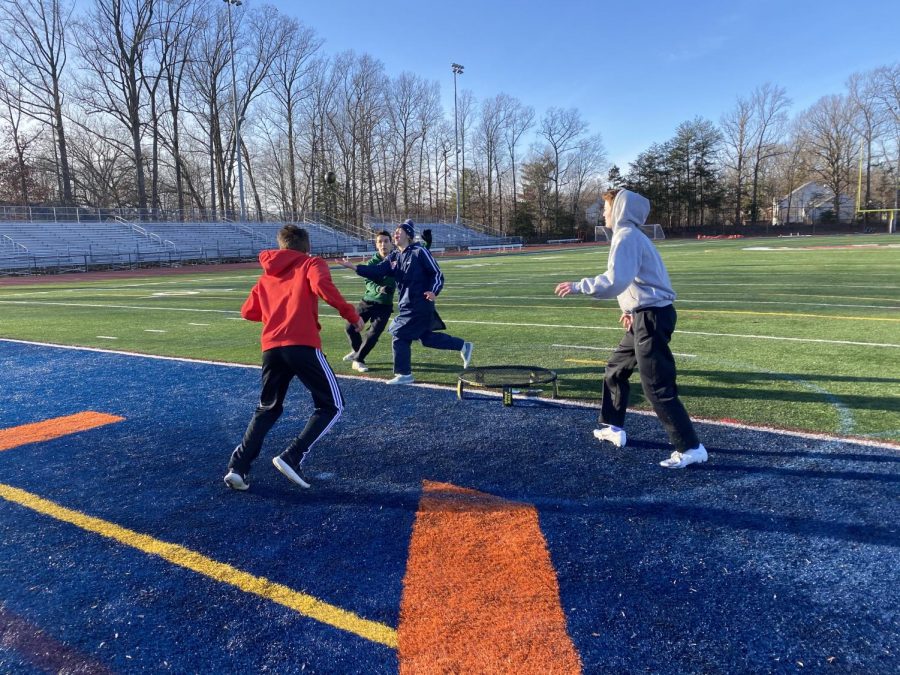 Four Spartans battle in a frigid game of Spikeball in Jaunary. Depsite the below-freezing conditions, the Spikeball club continued to be a hit throughout the month, with meetings continuing twice a week.

Four people, two teams, one pit, and one ball. Spikeball is a sport that has been sweeping the nation‒and now West Springfield.

Originally created in the 1980s and called Roundnet, Spikeball has been growing ever since. In 2007, the sport truly took off when entrepreneur Chris Ruder created his company named ‘Spikeball’ and began to sell gear to play the game. The game was initially popular exclusively in  the US and Canada to play recreationally, but has now spread to Europe and Asia, and has even led to professional leagues, that are occasionally broadcast on major sites such as ESPN.

Anyone can play the game, and official sets are being sold for around 50 bucks. Anywhere with a reasonable amount of space is enough to get started‒and the game can even be played easily in large places inside such as a basketball court.

West Springfield took on this trend, and as of this year Spikeball Club has taken off. The club meets on Wednesdays and Fridays, and is open to anyone seeking to invest time into the sport or just try a new experience.

While many of the members of the club are pretty experienced players, it’s never too late to start playing.

“Come to spikeball [club] on Wednesdays and Fridays, or if you can practice on your own then by all means do that,” said junior Adam Stewart.

Many players suggest that as a key to all sports, practice is the key when playing Spikeball. Another important aspect of the game is the person you play with‒your teammate. Experienced teams suggest that finding a teammate may also not be as hard as it seems.

“Just show up, and bring friends if you want to. You can not really find a partner until you actually start playing,” said Stewart.

Junior Peter Montavon has been playing with Stewart and expresses the importance of teamwork in the game.

“Over time we’ve gotten used to each other where we just know the rotations and where the other person is without seeing them. Same thing with the net, the more you play the more awareness you have on where you are in relation to the net, and you can judge whether you can spike [the ball] or just hita biscuit for your partner to smack,” said Montavon.

Following through with the widespread trend, stop by at Spikeball club to try the sport for yourself!