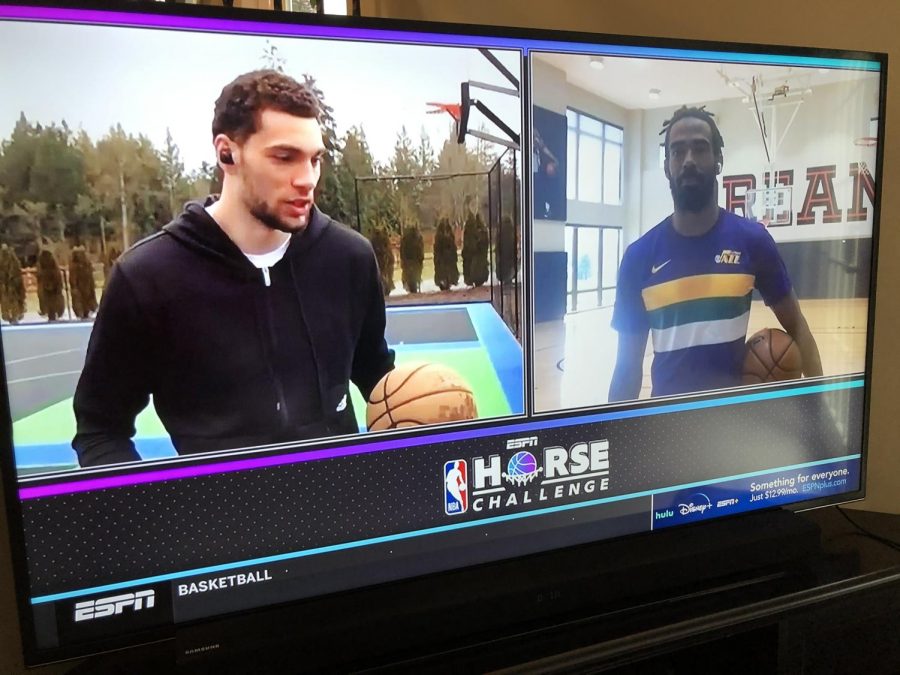 A view of the split TV screen on ESPN as Chicago Bulls forward Zach Lavine explains his next shot in the final round against Utah Jazz guard Mike Conley. Conley would go on to win the competition despite Lavine’s use of controversial near-dunks throughout the event.

When the NBA suspended its season on March 11th, a domino-like wave of sports cancellations spread across the country. A stretch of weeks which typically includes March Madness, the NBA playoffs, the NHL playoffs, the Masters, and the beginning of the baseball season suddenly had become a gaping void of sports-nothingness.

Sports typically serve as an escape from reality during uncertain times, but because of the coronavirus pandemic, stadiums and arenas across the nation are barren. Thus, in an attempt to fill the sports-sized hole in the hearts of fans across the country, ESPN, the NBA, and the NBPA came together to organize the first ever NBA HORSE Challenge Presented by State Farm.

The event included NBA stars Mike Conley, Zach Lavine, Chris Paul, and Trae Young along with WNBA legend Tamika Catchings, current WNBA all-star Allie Quigley, and retired NBA greats Paul Pierce and Chauncey Billups. The tournament-style competition took place at each player’s respective, private home-courts, with the quarterfinals airing on Sunday, April 12th. ESPN NBA commentator Mark Jones hosted the event virtually, as the players went back and forth taking their shots. The classic HORSE rules were in effect: player one picked his or her shot from anywhere on the court and if they made it, player two would have to match it or be given a letter. The first player to receive five letters, spelling out H-O-R-S-E., lost the matchup.

“It was very interesting to get to see the players’ home set-ups,” said junior Tre Jones. “Mike Conley had a massive indoor court while some of the other players were practically playing in their driveways.”

The differing courts presented a unique challenge for the players as they often had to assess their competitor’s landscape before attempting their own shot. Ultimately, Mike Conley, Zach Lavine, Allie Quigley, and Chauncey Billups advanced to Thursday’s semifinals.

A storyline throughout the event was the shot-selection of Chicago Bulls’ guard Zach Lavine. The 25 year-old who is best known for his 2015 and 2016 NBA Slam Dunk Contest championships, frequently tested the limits of the competition’s ‘no dunking’ rule. Lavine’s take-down of Allie Quigley in the semifinals sparked outrage from sports columnist and perennial blowhard Skip Bayless. Demonstrating that no sporting event — no matter how trivial — is immune from today’s ‘hot takes,’ Bayless blasted Lavine on twitter, saying “You’re a two-time Dunk Contest champ & you resorted to using leaping acrobatics to beat an Allie Quigley who readily admitted she doesn’t have the ups. You made the 2nd most threes ever in an NBA game, and you were afraid to challenge her from distance.” Nonetheless, Lavine advanced to the finals where he was met by crafty NBA veteran Mike Conley, who had worked his way to the finals thanks in part to his ambidexterity.

The finals were a back-and-forth affair; but, in the end Conley had too many tricks up his sleeve and took down Lavine H-O-R-S-E to H-O.

The challenge served as a much-needed escape for many basketball fans and also served a good cause, with sponsor State Farm donating $200,000 to coronavirus response efforts.

“Even though the video quality was terrible, it was good to finally see some live sports on TV,” said junior Austin Ohlmeyer.