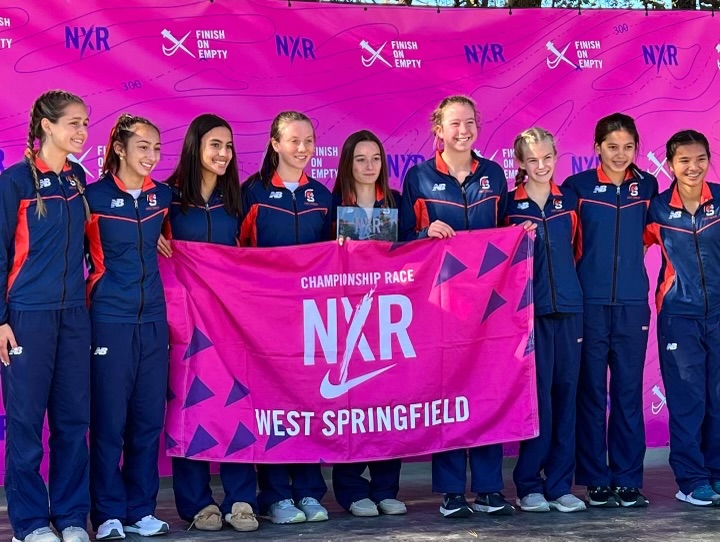 The Girls Cross Country team posing together for a group photo after competing at the Nike Cross Regionals (NXR). After sweeping first place at Districts and Regionals, they finished third at States and finished third in an unusually small field of 10 teams at NXR.

This year, the Girls Cross Country team was in complete contrast with the Boys team. Both teams swept first place at Districts and Regionals, but, rather than being a swan song for the seniors with help from a couple of juniors, their postseason team was an almost even split of underclassmen and upperclassmen. And those underclassmen have already made an enormous impact.

“I’m really proud of us because, at the beginning of the season, we were all kind of nervous,” said sophomore Aidan MacGrath. “[There were] new people, we lost some people that we really cared about, so we were all really nervous. And then, pretty soon into captain’s practices and at meets, we all [began] to get really close, and we built a really good team chemistry. Running is a mental game, and it’s all about how you feel mentally. It’s a hard sport, so being close with your team and having good team chemistry really helps. And it paid off.”

Like Henry Anderson for the Boys, MacGrath finished as an All-State runner and was her team’s top finisher at the Nike Cross Regionals (NXR). Her victory at Districts also made her the only individual champion for either team at any level of the postseason. MacGrath’s success, along with fellow sophomore Chloe Miller, shows how, unlike in some other sports, Cross Country runners can come in from day one and make an almost immediate impact on the Varsity level.

“I thought this season was really good,” said Miller. “[At] States, I mean, everyone, for the most part, executed their race plan. Even though I specifically didn’t have a great race, it kind of evened out because Adeline had a really good race. But I think overall we did really good.”

MacGrath and Miller were last year’s freshman prodigies for the distance girls, with this past season marking their fourth straight States appearances in just four total seasons of Cross Country and Track. However, the two sophomores aren’t the new girls anymore as another freshman made waves at States this year.

“I think [the season] went really well,” said freshman Adeline Barker. “Our team [was] really good about working together and using situations that might have not been ideal where we [could] still win.”

Barker, MacGrath, and Miller were the only three underclassmen at States, as the majority of the postseason Girls runners were upperclassmen. Still, while the Boys team was composed of junior and senior athletes, the Girls team was split four-to-three, and three of those four upperclassmen were juniors. Out of the group, only one of them was in high school when the Girls Cross Country team won their first and, currently only, State Championship in 2018.

“I’m proud of the team because we all had some problems with injuries,” said senior Haley Goldin. “And I think that the course and the conditions [at States] were really tough, but we all pulled out and did the best we could.”

Due to injuries, Goldin was unable to compete at Regionals, but the team rallied to win without her, and she came back to deliver admirable performances at both States and NXR. The Girls team struggled through several key injuries throughout the season, and, incidentally, the injured runner Goldin came back to replace at States was yet another star underclassmen.

“I think that the girls performed extremely well at States,” said sophomore Maddie Blake. “They pushed through a lot of injuries and I’m so proud of them for finishing third in the state. It was an exceptionally hard course and they all finished very strong. I would’ve competed this year if it weren’t for my stress fractures.”

Blake was another standout freshman last year, but has had three of her four trips to the postseason cut short due to a slew of injuries. Nonetheless, she has another eight seasons left in her high school career, and, just like MacGrath and Miller, is poised to play an integral role in the team’s success going forward. With Goldin the only postseason runner set to graduate at year’s end, this Girls team is clearly built, not just to win now, but to continue winning for years to come.

Just like how the senior boys share a close bond, the junior girls are already a tight-knit group despite having differing levels of prior running experience.

“We are all like family and will always have each other’s backs,” said junior Riley Sucato. “I am so proud of how [our] Girls team worked together as one unit, as that was our goal from the beginning of captain’s practices. It was very cool to see everyone get better over the season.”

Sucato started her running career notching postseason appearances as a freshman, but is now one of the veteran runners on the Girls team. Even so, Stein and Sucato, along with postseason alternate Anastasiia Goi, are all friends outside of Cross Country. The sport really lends itself towards creating and fostering lasting relationships, as the teamwork and cooperation needed to succeed leaves little room for drama or personal vendettas.

“This [was] my first Cross Country season and I really like the team,” said junior Kenza Elakari. “It was a really fun season and I’m looking forward to next year.”

Unlike her fellow juniors, Elakari was originally a sprinter, running the 100 and 400 meter dash at Districts and then just the 400 at Regionals last year. Even though this was her very first season running distance, she quickly carved out a role for herself and emerged as the third best runner on the Girls team, behind only MacGrath and Miller.

“I had a hunch that [Elakari] had this kind of upside, but she’s gotten there a lot quicker than even I had hoped for,” said Head Cross Country Coach Chris Pellegrini.

Ultimately, as Pellegrini and the rest of the coaching staff look forward to the next season of Indoor Track, it’s with the knowledge that their distance runners look to be just as dominant as they’ve been for the past several years.

“Looking around at the program and the guys that returned from last year, I think the boys should be in position to compete for a District and Regional title again,” said Pellegrini. “I can’t say that that will happen but I think that we’re gonna be in the discussion for it. And then, our Girls team is actually making good strides forward in different areas of the program to potentially be a little bit more towards the front in that end as well. I don’t know if they’re gonna be quite ready to compete for a championship, but I think they’re making progress.”