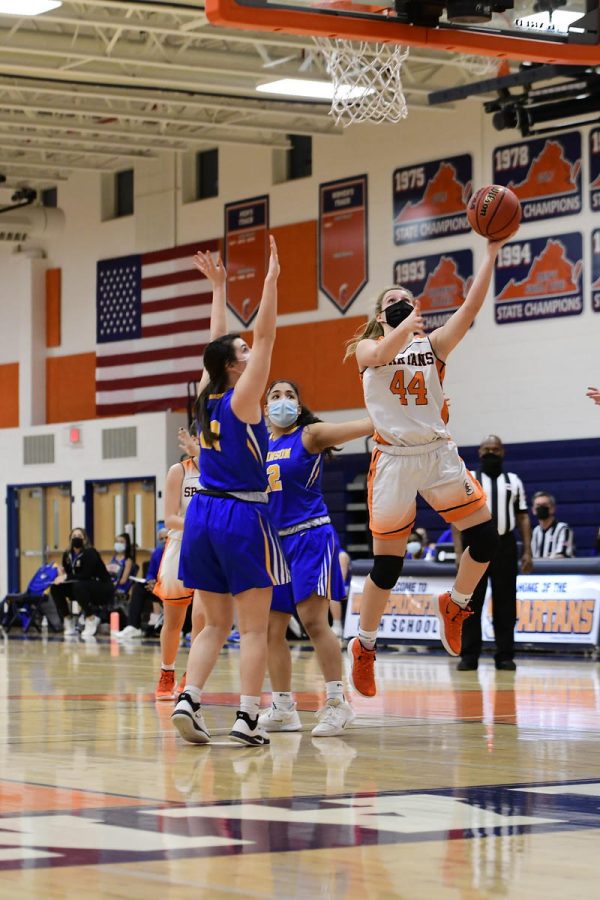 Lexi White shooting during a fast break at the District Championship. She went on to score 14 more points throughout the rest of the game.

“It is such a tremendous honor to have accomplished such a feat, but I have had such amazing coaching and teammates, so I am very thankful,” said Lexi White, senior team captain, who has four district championship titles.

The girl’s basketball team has been preparing for these games all season, but they did not have an easy win. They were down by fifteen during the first quarter and the game was tied at the start of the second half.

“No matter what my actions or the last play was, I needed to stay focused on the bigger picture,” said White, “which was ultimately winning.”

To prepare for the championship game, a few players had strict rituals that they followed to get in the right headspace.

“Some of the players went to do our ritual Dunkin’ Donuts run, before the game, which helps us start to get hyped for the night,” said sophomore Krista Bjarnason.

Once at the school, the team also had a group warm-up period that allowed them to strategize, prepare, and get in the flow of the game.

“We typically start with a team talk outside with the coaches, then at the end of warm-ups we meet up and huddle getting mentally prepared. It brings the teams excitement and cohesion together. Also right before we go onto the court the starters typically will get together and just share some words of positivity and hope to each other,” said White.

Along with the traditional warm-up routine, the celebration of the win commenced with a ceremony held each year. During a normal ceremony, the winning team cuts down the losing team’s net. Each player would climb the ladder and cut off a small piece to take home. Due to Covid-19, only one player was selected to climb the ladder and cut pieces for everyone on the team.

“We all huddled afterward and got to watch our captain take down the net and give us all a piece. Definitely a great souvenir to take with us,” said Bjarnason.

To avoid huge crowds each team member was allowed to bring only two family members to attend the game. As a result, the crowd was considerably smaller than years in the past.

“It’s a little weird to not have people in the stands, but at the same time it takes away the distractions during the free throws and interference with referees’ calls,” said White. “Also our bench is amazing and is a great fan base on its own.”

With the limited amount of in-person attendees, West Springfield high school set up a virtual streaming platform where anyone can view the game. Since away teams weren’t allowed any guests, every single game was streamed live this season.

“It was a lot quieter than last year’s district finals but I knew a lot of people were tuning in online to support us,” said Bjarnason.

To finish off the night, players gathered together to take photos and had a celebratory dinner. Seniors felt bitter-sweet since they won but it also meant that the end of the season was approaching.

“It was a cool experience and a great feeling,” remarked Bjarnason, “knowing that all our hard work throughout the season played off.”