How to be an LGBTQIA+ ally 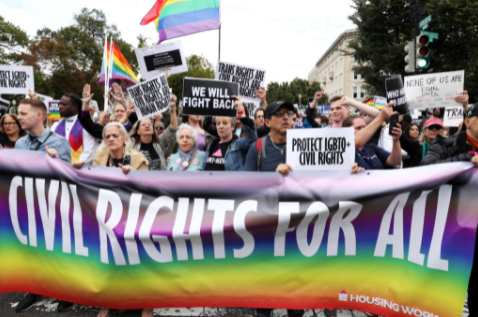 Allies of the LGBTQIA+ community support members with coming out and being comfortable in their sexuality. (Photo via PBS.org under Creative Commons License)

Members of the LGBTQIA+ community continue to experience both blatant homophobia and microaggressions, although views regarding same-sex marriage and members have changed throughout the years.

When asked by the General Social Survey in 1988, only 11.6% of the participants stated that they were for same-sex marriage, while when asked in 2018, that number rose to 68%.

Students face discrimination from a variety of places such as their family and friends.

“My best friend from elementary school started ignoring me after I came out to her,” says a WS junior. “I knew that she was homophobic on the basis of her religion, but I told her anyway because I thought our friendship was bigger than that.”

According to the Pew Research Center, the United States still maintains one of the lowest LGBTQIA+ acceptance rates in the North and South Americas and Western Europe, when 38,426 respondents from across the world were asked if homosexuality should be accepted by society.

“I’ve been honked at and had random people on the street make derogatory comments while I was trying to hold hands with my girlfriend,” says senior Klara Smith.

Many members of the LGBTQIA+ community experience discrimination based on their sexuality from those around them, and this can be a hurtful and upsetting situation, even if it is not specifically directed at them.

“While I have not witnessed direct homophobia at WS, I have overheard boys in the hallways using homophobic slurs while joking around with one another,” said Smith.

“At churches I have been to, not so much at my own, there has been a ton of homophobic comments. It was never directed at me, since I wasn’t publicly out, but it really hurt to hear. Even though I’m bisexual and not gay, the comments are hurtful since they’re directed towards the queer community,” shares Jacqueline Welsh, a junior.

“To be honest, the only thing I care about in terms of someone being a good ally is just not making a big deal out of things and moving along without a lot of questions and judgment,” states Smith.

“I just want to be treated like everyone else. Don’t be afraid to talk to me about my relationship if it isn’t a straight one,” Welsh shares.

Those in LGBTQIA+ relationships feel as though their relationships are easily invalidated, and even fetishized, such as when members are expected to fulfill a specific stereotype, or making a person an object of sexual desire because of a trait such as their sexuality.

“I feel like fetishizing [of the LGBTQIA+ community] is a huge problem, and it’s honestly really annoying,” Welsh says.

Being an ally is not just standing up for the LGBTQIA+ community. Being an ally also includes educating yourself or even asking someone who is LGBTQIA+ to clarify something you don’t know about the community or how to handle a situation.

“I think a great thing people could do is try to observe and learn about queer culture more. There are so many people out there who are eager to educate others if they ask nicely,” Smith states. “For many people it is easy to lump things into one category, but being LGBT+ is always such a unique experience for each individual person.”

If you’re interested in becoming a better ally, consider joining a Gender and Sexuality Alliance as an ally or getting involved with an organization such as The Trevor Project.