Trump vs. Pelosi: an ongoing feud 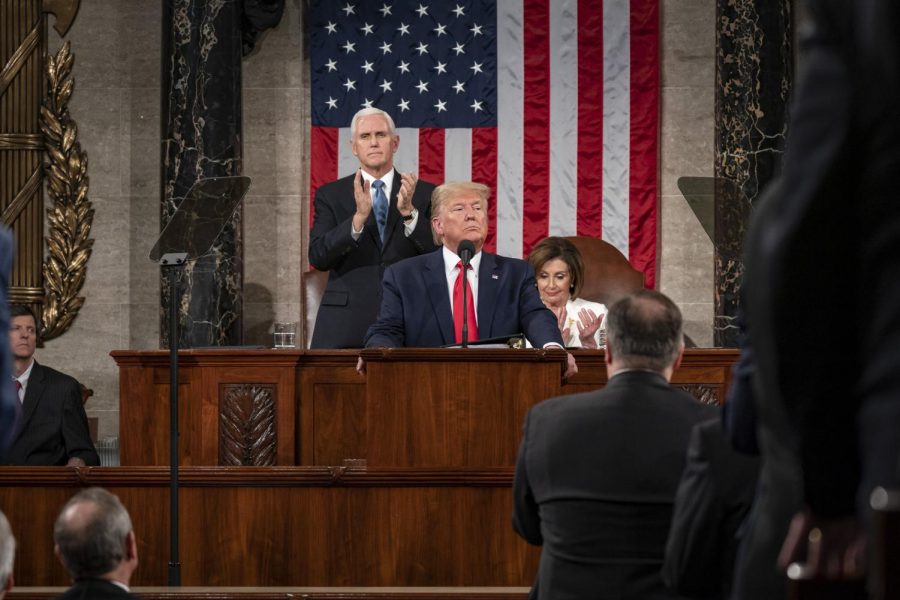 Courtesy of the White House, via Flickr under Creative Common License

On February 4, 2020 President Donald Trump gave his State of the Union Address where he bragged about all the good his presidency has brought. This speech sparked controversy for many reasons, one being the actions of Speaker of the House Nancy Pelosi ripping up his speech and another being Trump awarding Rush Limbaugh the Presidential Medal of Freedom

After Donald Trump’s State of the Union address on February 4th there was much uproar over the actions of the speaker of the house, Nancy Pelosi. After the president finished his speech she proceeded to rip up her copy of it. Many people say it was childish of her to do so, and as a member of Congress she should have acted more professional. But, what about the president?

He continually acts in a more immature manner than her, yet those who immediately called Pelosi childish do not acknowledge this. He has mocked reporters with disabilities, women, immigrants, the list goes on and on. Shouldn’t the president of the United States, the highest office in the land, be held to a higher standard than that? Under Trump, it seems not. Under every other president, I believe there was a higher level of esteem. One must give respect to get it, and it is safe to say Trump is not a man of respect. There seems to be no limit for him and no consequences either.

Earlier that same night Trump did not shake Pelosi’s hand. Some say “he may not have seen it” but, isn’t it expected. At last year’s SOTU Trump did in fact shake Pelosi’s hand, so he knew it was coming, did he not assume she would shake his hand this year as well. That too was immature and childish yet those going after Pelosi make excuses for it. It is not a tit for tat on who is in the wrong, and even if it was Trump would win, however I am just trying to show that those being angry at Pelosi are blind to what their own president is doing. It also seems they hold him to a lower standard, which is unfair. Trump supporters call her childish yet are blind to the man they aimlessly follow. Yes I’ll admit Pelosi ripping up the speech was petty and she should have taken the high road and acted more maturely. But, at the same time I don’t think it was so out there that people should be calling for HER resignation. This whole situation is interesting because Trump can abuse his power and obstruct justice ( though not convicted, but come on) and he will remain in office, Nancy rips a paper and she is scrutinized. That to me seems like a double standard.

If you still aren’t convinced that Trump is the “childish” one, here is another example. After Republican senator Mitt Romney voted guilty on the charge of abuse of power during the Trump impeachment trial, Trump and even his son went on Twitter and ridiculed him. He then did the same thing during his speech at the National Prayer Breakfast. As a political figure you shouldn’t cry about people not being on your side. Trump being publicly sour about it is grossly inappropriate. Mitt Romney will be on the right side of history. No other Republicans voted guilty on either counts and did not even allow witnesses in the trial. Could you imagine a regular trial with no witnesses, that wouldn’t happen under any other circumstance, but Trump can do whatever he wants can’t he. All senators of the Republican Party chose party over country on February 5th, and selfishly worried more about their image and re-election than what’s best for the country. Many even said that if the vote had been anonymous then there could’ve been a different outcome. It is now evident that Trump’s wrath is greater than that of the American people for Republican lawmakers.

After what Trump did to Romney when he stood up in the best interest of the people, it reassured other GOP members that if you go against Trump, there are consequences.

So do I think Nancy Pelosi was wrong for ripping up the speech? No, not really. Yes, it was petty and she should have been the bigger person, however it is not nearly as big of a disrespect than the actions Trump has taken over the past three and a half years.