Six ‘heroes’ of the insurrection 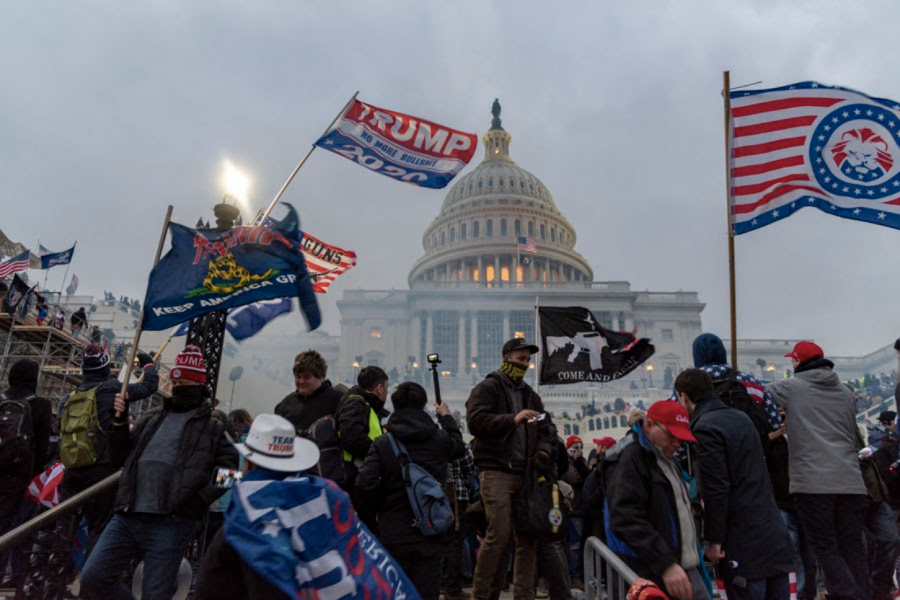 Photo captured of the insurrectionists breaching the Capitol barriers.

January 6, a day that shall live in infamy and never be forgotten. Those in government who aided and abetted the insurrectionists who tried to dismantle American democracy must face consequences for their actions.

In 1868, the United States Congress passed the 14th amendment. Most notable for clarifying who is a citizen of the United States of America, the amendment also states in section 3 that no one can hold public office if they subsequently “engaged in insurrection or rebellion against the same, or given aid or comfort to the enemies thereof.” The definition is straightforward: if someone rises up, or aids a group rising up, against the union, they are prohibited from holding public office or receiving any honors.

Government officials, such as VA Sen. Amanda Chase, US House Reps. Marjorie Taylor Greene and Lauren Boebert, US senators Ted Cruz and Josh Hawley, and former President Donald Trump are all subject to the 14th Amendment. They should be held accountable for their rhetoric and actions, and should face the consequences prescribed by the law.

VA Senator Amanda Chase has called the insurrectionists “patriots who love their country.”

At 10:55 p.m. on January 5, Greene tweeted, “Leaving the office after planning meetings for our electoral college objection. Tomorrow is an important day in American history[.] The people will remember the Patriots who stood for election integrity. Let’s go #FightForTrump!” At 8:37a.m. Greene tweeted, “FIGHT. FOR. TRUMP. 🇺🇸🇺🇸🇺🇸 #FightForTrump”. Her calls to “fight for Trump” and references to how important the sixth was going to be, due to “the Patriots”, is a public display of her role in the insurrection.

On January 6 at 8:30 a.m., Boebert tweeted, “Today is 1776.” The tweet refers to one of the main slogans of the insurrectionists. “1776” refers to the start of the Revolutionary War and their belief that the current U.S. government is illegitimate and needs to be overthrown. Boebert’s reference suggests that she had foreknowledge of what was to come and supported the forceful takedown of American democracy.

For more on the use of 1776 as a battle cry, The Washington Post reported, “References to the year 1776 and the American Revolution have grown substantially among the far-right as Trump supporters and conspiracy theorists have hinted at the possibility of a revolution in the wake of Trump’s election loss, which they view, falsely, as illegitimate. Trump allies and surrogates, including first-term Reps. Marjorie Taylor Greene(R-Ga.) and Lauren Boebert (R-Colo.), referred to Jan. 6 as Republicans’ “1776 moment.””

Both Greene and Boebert have also supported the conspiracy theory group QAnon in the past. QAnon followers subscribe to the belief, among other things, that Trump is a savior who will stop a cult of Democrats that are pedophiles who worship satan and drink the blood of children.

Hawley was seen passing the gathering mob with his fist in the air. “There’s just a mutual acknowledgment between the senator and the crowd,” said Francis Chung, the photographer who took the picture, in an interview with the Kansas City Star, “There was a mutual show of what I would interpret as approval or support.”

“[Hawley’s] clenched fist in front of the Capitol will seal his fate. He thought he was getting the mantle of leadership from Donald Trump and his followers, but there’s not enough of them to ever give him a future in politics,” former Republican Representative from Missouri, Tom Coleman said. He also tweeted, “Hawley and Cruz are responsible for this.”

All of these people, and any other insurrectionists and coconspiritors, must face the full consequences for their actions. They must all be disqualified from holding public office and receive any honors as detailed in the 14th amendment and the Unsurfection clause as detailed in 18 U.S. Code § 2383.

There is another crime these people committed, and it is not shared lightly. The people who conspired to attack the Capitol, and those who actually did, are all guilty of the high crime of treason. Yes, treason is in fact a crime with which many insurrectionists should be charged. As explained by Chief Justice John Marshall, “if war be actually levied, that is, if a body of men be actually assembled for the purpose of effecting by force a treasonable purpose, all those who perform any part, however minute, or however remote from the scene of action, and who are actually leagued in the general conspiracy, are to be considered as traitors. But there must be an actual assembling of men, for the treasonable purpose, to constitute a levying of war.”

The insurrectionists, and even President Donald Trump himself, referred to the actions of that infamous day as acts of war. For Trump, the certification was an act of war; for those who stormed and laid siege to the Capitol, they considered their own actions to a revolution— an act of war.