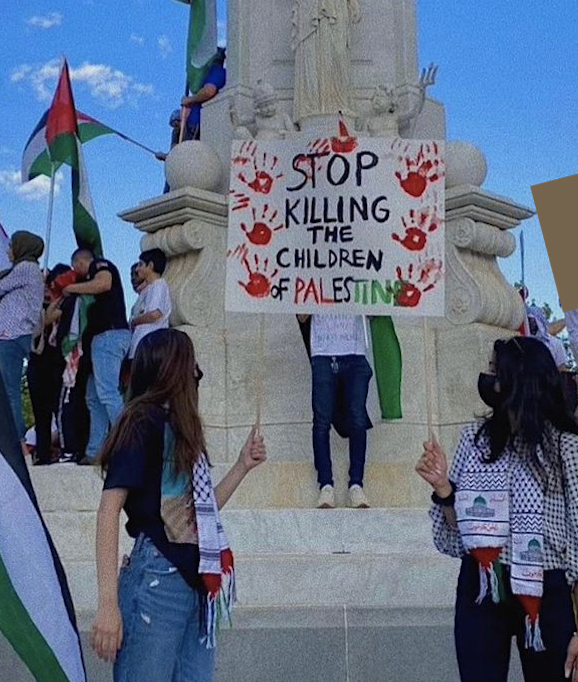 Hundreds of people are seen protesting in Washington D.C. at the Peace Monument in front of the Capitol Building.

As violence against Palestinians has heightened recently, there is a dire need to be reminded of the humanitarian crisis that is at the heart of this political conflict between Israel and Palestine.

The origins of the current situation trace back to when the majority of the Middle East was brought under European control after the dissolution of the Ottoman Empire in 1918. This arrangement left Palestine to be controlled by the British, who held onto the country for nearly three decades until the aftermath of World War Ⅱ consequently led to the Zionist movement of creating a Jewish state. Unfortunately, this conquest has led to the displacement of many native Arab Palestinians of all faiths who have been living there for hundreds of years.

In 1947, the United Nations proposed the partition of Palestine into two sections of Arab and Jewish controlled territory and the British withdrew the following year. After the establishment of Israel, tensions between the Arabs and Jews led to a series of conflicts that involved neighboring Arab states such as the Arab-Israeli War (1948-1949) and the Six-Day War (1967).

Fast-forward to today, Israel has infringed the initial boundaries of the UN partition and has been seizing more of Palestinian allocated land. At the center of this feud is Jerusalem, a city of great significance to the main three monotheistic religions. This land occupation movement has led settlements to be created in Palestinian territories, diminishing any prospects of contiguous land through their control of transport systems like highways and roads.

“There’s nothing worse than being discriminated against in your own country. You get stopped every other hour in the street, you get searched all over your body [to and from] anywhere you go, and you are not allowed to move freely without permission,” said Mohammed Shehadeh, a Palestinian-American resident of Springfield.

Israeli methods of land seizures have also shifted over time as their techniques have become increasingly calculated which creates new forms of systemic oppression.

“[Israel] occupies through law and court orders. Property taxes on Palestinians are 10 times [that of] Jewish homes. [Soldiers] even come visit [late at night] with court orders to either pay $100k on the spot, destroy the home, or get arrested. Most Palestinians choose to demolish their home with their own hands or die underneath it, but not to [relinquish it],” conveyed Shehadeh.

Sophomore Layan Dweik spoke of her parents’ experience of growing up in Hebron, a city located in the West Bank, during this state of turmoil.

“[My parents] would be forced to stay in their houses for up to six to ten days [at a time] and wouldn’t be allowed to leave, even for groceries, emergencies, or even visiting the doctor unless it was within two specific hours during the day,” explained Dweik. “[The soldiers] wouldn’t even want to see your face through the window, or they would make a big deal out of it.”

In her experiences of traveling to Palestine in 2018, Dweik encountered many difficulties due to her parents’ identification as Palestinians, preventing them from traveling through any Israeli airports. Palestinians have to pass through extra borders and hurdles just to return home. She and her family would first have to travel to Jordan, where they would then cross the Israeli border, and then finally make it to the Palestinian border in West Bank. Each stop at a border resulted in hours-long procedures of examining identification, answering interrogation questions, and analyzing luggage. This sort of inconvenience adds to transportation and lodging costs as the questioning processes could grow into overnight issues.

“Soldiers pointed their guns at people for no reason or for something as simple as telling you to line up. I would see children scared or crying,” said Dweik, “you don’t see people in other countries, airports, or borders getting treated like that for just traveling.”

The land seizure conflict in Sheikh Jarrah in East Jerusalem over the expulsion of Palestinian residents is what escalated into the fighting that has been witnessed. This dispute detonated into the violence when Hamas, an extremist Palestinian militant group, began to fire rockets into Israel.

The oppression of Palestinians has been going on for 73 years, and the 11-day bombardment of Gaza from this past month is yet another example of Israel’s continued attempts of settlement under the demeanor of self-defense and protection of its citizens. They subsequently launched bombing campaigns targeting the Hamas leader since the group is said to have been launching the rockets from their base in Gaza. These bombs mostly affected civilian homes and buildings, resulting in at least 243 deaths, many of whom were children.

These sorts of violent encounters are not new experiences for the majority of Palestinians who have lived and continue to live there.

“Every single day, there’d be tension between [the Israeli’s and Palestinians], shootings and tear gas [all the time]. My mom’s house specifically has been shot at multiple times and a lot of things would break. Two of her siblings have had near-death experiences getting shot in the head. This was [all] while sitting in their own house. Their houses would be tear-gassed, [which] would result in them going to hospitals and the smell would last up to months in their houses,” said Dweik.

Certain people in America and the western world tend to side with Israel and perceive any negative comments or criticisms towards the Israeli government’s actions to be a form of antisemitism.

“I do have ties to Israel [as] I am an Ashkenazi Jew,” said sophomore Claire Elliot, “but it’s also important to understand that criticizing the Israeli government is not a form of antisemitism. It’s simply [criticizing] the oppression of innocent Palestinians.”

Even with the highly disproportional number of Palestinian deaths compared to Israel’s, the United States government continues to support Israel without acknowledging the humanitarian suffering of Palestinians. The U.S. continues to provide aid militarily in the form of arms sales to Israel with a looming $735 million sale.

“The American government should halt the sale of the $735 million worth of weapons. U.S.-made bombs [have] already [devastated] Gaza. It would be immoral to let another huge arms sale go through,” stated Elliot.

Still, violence against Palestinians remains eminent and those who are affected the most are the families who have lost their livelihoods and homes to Israeli air raids. The crisis itself is more than just a conflict over land—it is one of humanity.

“I know so many [who have been affected], but you may be surprised that people are not as sad as you may think. The people are so proud and happy that they are fighting for their land, for their religion, for their freedom, for their basic rights, and for their dignity,” expressed Shehadeh.

While the U.S. government has chosen to support Israel’s right to defense, this should not happen at the cost of Palestinian suffering. Everyone has the right to live freely and safely and the conscious international community should work towards minimizing the loss of innocent lives.